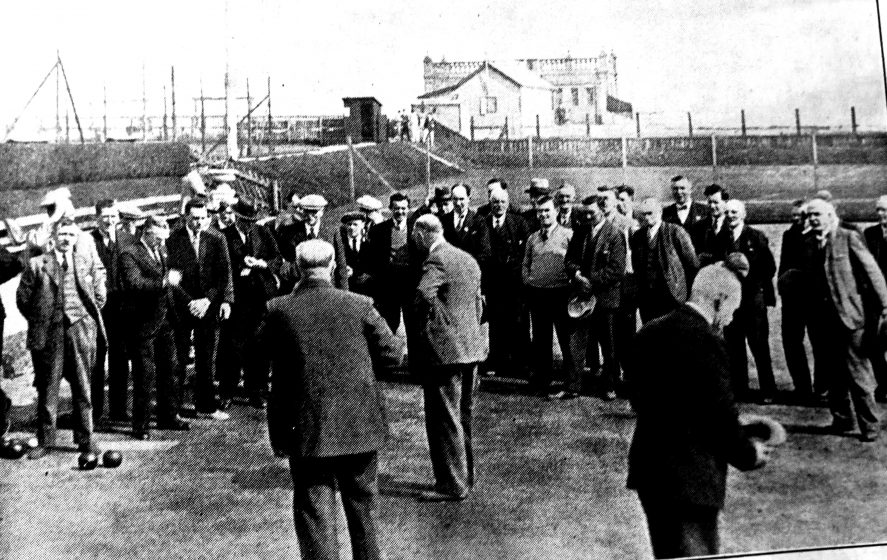 Event to Coincide with Opening of New Swimming Pool

How County Town’s Playground Has Grown

The jubilee of Stonehaven’s Recreation Grounds falls next year, and the opening of the new swimming pool will add to the interest in the event. The growth of the Recreation Grounds during the past fifty years is traced in this article.

It is particularly appropriate that the inauguration of Stonehaven’s latest development in open-air recreation – the new swimming pool – should come in the jubilee year of the County Town’s Recreation Grounds.

Since ever Stonehaven became known as a seaside summer resort these grounds have been in the first rank of her amenities, and they still hold that place to-day. Never has their attraction been more appreciated as a magnet for visitors than in 1933.

Fifty years of progress, backed by courage, foresight and enterprise – that is their story. Few of the younger people who spring with light steps across the tennis courts, wrestle with the intricacies of the pitching and putting course, or join their elders on the bowling greens realise what an interesting story this playground represents.Picture this spot as it was in the seventies of last century. The River Cowie made its way to the sea, as to-day, but on its north bank just before it entered the sea were a farm steading approached by a rough road from the beach, and a salmon pond.

In going back to the beginnings of the Recreation Grounds we must remember, first of all, that at the time this part of Stonehaven did not come under the jurisdiction of a burgh council. The New Town had sprung up as an off-shoot of the older part of the town lying to the south of the River Carron; but its expansion was rapid and steady, and the inhabitants soon began to think about some organised means of protecting their interests and promoting communal welfare in this new colony which was to become the Stonehaven of to-day.

They were shrewd, far-seeing men

At a public meeting in June 1856, an association of feuars and householders in the New Town was formed, and one of the first functions of this body was to set about improving the amenities of the town. They were shrewd, far-seeing men at the head of affairs in these days, and to them a debt of gratitude is owed by Stonehaven and by all who enjoy her charms year by year. About 1882, a piece of ground on the north bank of the River Cowie was secured from Sir Alexander Baird of Ury for the formation of a tennis court and bowling green and croquet greens. In 1884, the grounds were formally opened by William Disney Innes, Esq., of Cowie.

The bowling green – now the lower green – was then much smaller than it is now – accommodating only four rinks. Its extension to the present size was carried out with a sum of £70, raised by voluntary subscription among the bowlers and their friends.

The salmon ponds were gradually filled in, and with their disappearance the grounds expanded and tennis courts were added.

The first full season’s drawings from the grounds amounted to £77, and to give some idea of the immense strides which have been made one need only mention that the record touched a few years ago was well over £1000.

A notable citizen who took a leading part in this pioneer work was Mr A. Kinnear, who was chairman of the Grounds Committee for the first 23 years of its existence. He was followed by Mr James Mowat, who was chairman for 17 years.

A new phase of Recreation Grounds management began in 1893, when Stonehaven was formed into a Police Burgh, and the Feuars’ Association was superseded by the Town Council. But the Grounds were not simply handed over to the care of the new municipal body. With the approval of the Town Council, application was made to Parliament, and in due course the Stonehaven Provisional Order brought into being the body of trustees as it remains to-day. It provided for the annual election of nine trustees – three by the Town Council, and six by the subscribers to the grounds for the full period of the preceding year. The first election took place in 1903, when the trustees appointed were: – Messrs A. W. Kinnear, Robert Falconer, James Mowat, D. C. Booth, Charles George, James Ogg, George Sorrie, D. Clerk, and Dr W. A. MacNaughton.

Under the new regime rapid progress was made in the development of the Grounds. The pace of life was increasing and with it the pace of tennis. The demand for hard courts was met by the laying down of what are now the three front courts.

The three principal courts were supplemented by six others to the seaward side of the Grounds, and the circumstances in which these courts were lost is a typical example of the way in which those concerned with the Recreation Grounds have always acted with a sense of the deepest concern for their best interests of the town. Making stride after stride along the path of progress, the trustees planned a second bowling green, and contemplated placing it between the first green and the sea. But just at this time the sea, against which Stonehaven waged continual warfare, destroyed the promenade, and, far from extending their bowling greens in this direction, the trustees were asked by the Council to give up some of the ground occupied by the tennis courts , so that it might be used for making a new promenade. Not only did the trustees agree to this, but they gave up the six hard courts without receiving a penny of compensation, or even a reduction of rent.

Meanwhile, however, a great improvement had been carried out at the opposite side of the grounds by the erection of a new pailion, at a cost of £500. It was opened in 1909.

In spite of generous donations for such schemes as this, the trustees did not have their financial troubles to seek. In 1910 the debt on the Grounds was nearly £300, but they faced the situation with courage and determination, and gradually the debt was reduced.

The grounds had now definitely come to the fore as one of Stonehaven’s greatest assets, and no opportunity was lost in widening their scope and appeal. The secret of their successful management all along has been that the trustees never shrank from expenditure on a generous scale, if such was necessary to keep the Grounds up to date as a first-class attraction to the town. A private water supply was laid out in 1912, at a cost of about £200, and it was about this time that the desirability for a second bowling green began to be discussed.

The curtailment of further development on the seaward side of the grounds, in the circumstances already mentioned, turned the trustees’ attention to the possibility of expansion in another direction. You will notice a distinct ridge running from the pavilion directly eastward to the beach. Up till this time this had been the track of a road leading to the beach, and the grounds had so far been confined to that part between this road and the River Cowie.

In 1913, however, the trustees acquired four acres to the north of the road. The road itself disappeared, and in its stead there were made what is still known as the ‘New Road’ – the only means of access to the beach for vehicular traffic – at the northern extremity of the extended grounds, and the footpath along the north bank of the river.

In a short time the rumble of cart wheels along the old farm road had been replaced by the smooth, silent run of the ‘woods’ on Stonehaven’s second bowling green. Financial difficulties were again encountered, however, before this came about, but once again these were overcome by a splendid ‘rally-round’ on the part of Stonehaven people. Before the contract for the turf for the green was placed, an appeal was issued to all bowlers for financial assistance. The result was that 23 men came forward offering between them sums totalling £250, free of interest for five years.

It is well-known that the County Town’s two bowling greens are among the best in the North-East of Scotland, and the way in which they stood up to the devastating drought of 1933 was one more proof of their superiority.

At this stage no definite plans have been made for the anniversary celebrations, but the jubilee cannot be allowed to pass without being appropriately marked. The suggestion that the trustees should co-operate with the Town Council and organise something special in conjunction with the opening of the new swimming pool seems to be a happy one. But whatever form the celebrations may take, 1934 will certainly be a big year for Stonehaven’s Recreation Grounds.

This article appeared in a ‘special number’ of the Mearns Leader and Kincardineshire Mail.