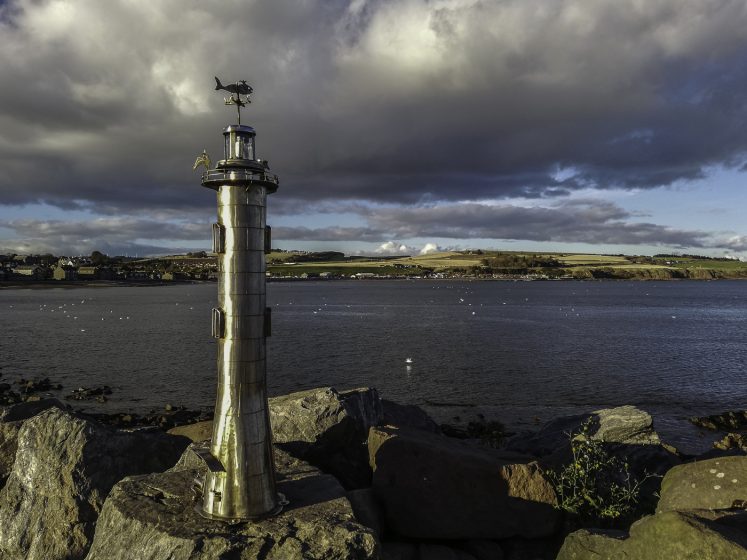 Stonehaven’s Bay Walk sculptures are an interesting addition to the very pleasant seaside walk that can be enjoyed from one end of the bay to the other, at any time of the year. The majority are the work of a local man who prefers to keep a low profile. None of the sculptures that he has produced have any signature or logo which would identify them as his work, although the more recent group of boats and the lighthouse all have a very similar style to the ‘crew’ that work in them. All of the sculptures are made of stainless steel which will weather in the salty air but not rust.

The first of the sculptures appeared on the 6th of May 2006 and was an open metal framework showing a salmon on rocks standing 60cm high.

The next was a Cormorant with a salmon in its beak. This one went up in May 2007 and again was an open framework sculpture.

2008 had two sculptures erected, both open framework constructions. One was a Sea Eagle with a salmon in its claws (it has since flown away to a new home). The other was the seal with a fish’s skeleton in its belly. This one is now in the picnic area beside the beach pavilion.

All of the sculptures up to this point had been created in response to events in the sculptor’s life.

A stainless steel plant appeared on the rocks in May 2010. It was produced in response to the UK general election that was being held that year. It showed the national flowers of the four countries in the United Kingdom.

May 2011 was when the first boat sculpture appeared. It was the trawler with nets and a fish ‘crew’ on board. The detail in the superstructure and on-board equipment makes the sculpture very interesting to look over. During a bad storm this creation was torn off its mounting and washed up beside the wooden foot-bridge. It was repaired and remounted with a ‘lookout’ for any more bad weather in the shape of a hammerhead shark with binoculars!

After a break of 2 years it was 2014 when a Dolphin was produced for the Outdoor Swimming Pool.

The small Seine Netter boat was next to be installed on the 18th of June 2015. Again there is an amazing amount of detail on the vessel with lots of visual humour involved, Hammerhead is reading his paper in the hold! The boat is called the James & Seth after the sculptors’ grandsons.

The second last day of 2016 saw the light shine from the lighthouse as it was installed complete with ‘crew’ in their quarters reading the papers and watching TV.

A year later the Viking boat was launched – 28th December 2017. Hammerhead with his battle-axe appears again in the bows along with Skate or Ray. The ‘crew’ in this case are fish and seahorses.

The Rose was launched on the 19th of December 2018. The ‘crew’ in this boat are Seth the crab and James the lobster. The catch in the boxes is human skeletons.

Despite the recent attention from the media the Sculptor wants to keep his profile low and just enjoy doing what he likes most – creating the wonderful sculptures.