Skye Base for Week of Climbing 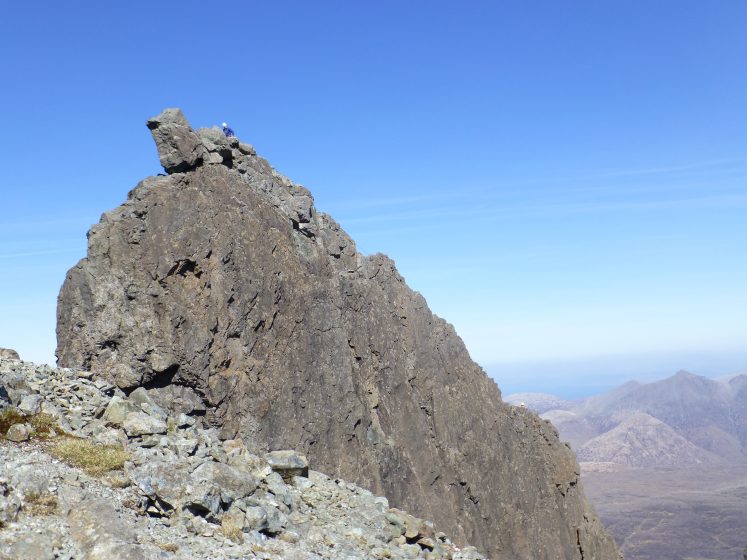 Stonehaven Mountaineering & Hillwalking Club’s annual ‘May Week’ this year had its base in the Old Inn Bunkhouse, Carbost Isle of Skye.

Conveniently placed for the Cuillin, and indeed for the pub next door which offers excellent ale and food, this is a great base which has been used by the Club on a number of occasions. It was a week of incredibly good weather allowing members the opportunity satisfy many an ambition.

It is impossible to relate the itinerary of the week in full, but on route some members made a detour to Glen Cannich to bag Grahams & Corbetts. On the onward journey they had hoped to dine at the famous Cluanie Inn only to find it in the middle of a comprehensive renovation and supposedly opening in spring 2019!

However it was the Black Cuillin with its narrow ridges and rough gabbro rock that was the focus of many, including the infamous Inaccessible Pinnacle. There are 11 Munros (over 3000ft) on this ridge, which provides one of the great mountain traverses but while conditions were ideal it was not attempted by any of the members.

Some of the long standing members who have completed their Munros were concentrating on Corbetts (2500ft – 3000ft) and were heading back to the mainland on occasion to add to their lists, while those who have completed both Munros and Corbetts not only spent time on the mainland to bag Grahams (2000ft – 2500ft) but also headed over to Harris where there are three Grahams and a Corbett.

A coast to coast walk from Elgol to Sligachan provided a useful diversion for one group, whilst another group took the opportunity to visit the recently discovered Viking shipyard. Visits were also made to the Trotternish Ridge with its two Grahams and dramatic Old Man of Stor, a remarkable pinnacle of rock which appears as though it is about to topple over.

Raasay, one of the small islands off Skye has a wonderful little flat topped hill, Dun Cana (443m). This amazing view point is said to have had Boswell dancing a jig of delight during his tour of Scotland. Who knows, but I can imagine his delight as the 360 degree panorama is incredible, on a clear day of course. Here also, on the north tip of the island is Calum’s Road. Constructed single handed over a period of 10 years by Malcolm MacLeod to join up the end of the public road with his crofting community at Arnish because the local authority refused to do it. They have subsequently adopted and tarred it.

The annual May Week quiz was conducted this year by John McPherson to prevent him from winning it again.