The Architect of Stonehaven’s War Memorial but much more. 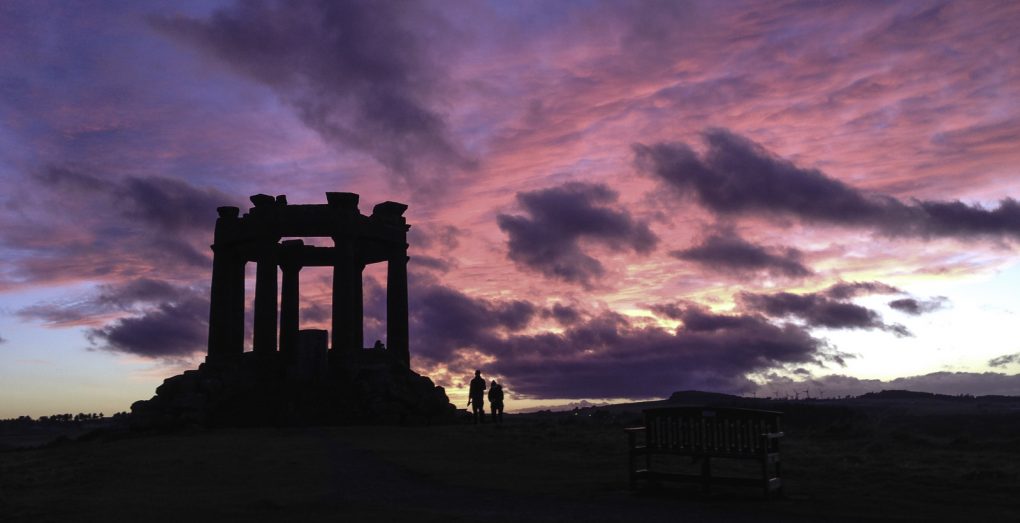 John Ellis designed Stonehaven’s most noticeable piece of architecture – the War Memorial. He was born on 10 June 1874 in Stonehaven to John and Barbara (Thomson) Ellis. John (senior) was a shoe maker. They lived, and he worked, at 79 Barclay Street. One of seven children John was articled, at sixteen, to the Aberdeen Architectural firm of Matthews and Mackenzie and stayed with them for six years (1890 – 1896) before starting his own practice in Stonehaven.

He commenced independent practice in Stonehaven in 1897, but almost immediately after, he emigrated to South Africa having met prosperous South African businessman George Hey in England. George Hey had transport links across parts of Africa and Europe. As a result of this meeting he was invited to develop a vision for a modern office block for George Hays’s company. John Ellis went to stay and work in the town of Pretoria, the administrative centre for South Africa. He had developed business sufficiently to take on a partner, another Scot, to become ‘Ellis and Fleming’ at some point. It is recorded that within the following two years he built up a considerable practice in Pretoria, which ended with the outbreak of the South African War in October 1899.

The building John Ellis designed for George Heys (Tudor Chambers) was completed in 1904. At the time it was the tallest building in Pretoria and constructed in a neo-Gothic style in Church Square. Materials were imported by Heys’s own maritime transport company from Scotland, electric passenger lifts from Germany, curved glass windows, stained glass, bevelled mirrors, marble staircase and floor. It even incorporated cast iron work from Macfarlane’s famous and highly prolific Saracen works in Glasgow. https://www.artefacts.co.za/main/Buildings/bldgframes.php?bldgid=3903

ohn Ellis is recorded having also carried out the design of Victoria Cottage Hospital 1904, the Stone Brothers Building 1906 and a rather fine looking country lodge retreat for George Heys. The lodge is now the exclusive Heysbrook Country Lodge Retreat. One of South Africa’s foremost Architectural design companies were appointed to undertake the restoration of the Tudor buildings, 100+ years on. Architect Teresa Frank of Gapp Architects & Urban Designers, has said that it was an enormous responsibility to undertake the renovation of Tudor Chambers correctly and as a result called on the expertise of architectural heritage specialist Prof Karel Bakker of the University of Pretoria. Specialist renovation builders were engaged to make sure that care was taken with every detail. Teresa Frank considered it ‘a privilege to be preserving this magnificent building for future generations. The newly refurbished building was opened in the autumn 2008.

John Ellis remained registered to practice in South Africa until 1909. He returned to Stonehaven in 1910 to recommence practice, at 21, then 29 Ann Street and later in Gurney Street until his death in August 1929 after months of a deteriorating condition. He had suffered from poor health throughout his life which was partly why he left for South Africa. He was 55 when he died. He was married to Kate James.

He designed a number of Council houses for the town. Some of the private houses he designed are – Pitgaveney in Baird Street, Greywalls in Kings Road and Hammer next door (which he built for himself and called Kya Rosa (Red House in Afrikaans). A house was designed for the Town Clerk possibly in Robert Street but there is no information which one. He also worked on Viewmount on Arduthie Road when it was the home of the Mowat family (who had the Tanning business in Allardice Street).

John Ellis’s commercial architectural commissions in Stonehaven include the former Ramsay’s the Drapers in Market Square, the Royal Hotel in Allardice Street, the Queen’s Cinema, and the former Bay Hotel in Anne Street and then, of course, there is the War Memorial on the Black Hill.

There was a personal element for John Ellis in the designing of the War Memorial, his youngest brother is named (Gardner Ellis) on the stone, as is a brother in law of his niece, and a cousin. He must have known many of those who died and their families so it would be a serious commission for him to do.

Although John Ellis made a greater contribution to Stonehaven than most of Stonehaven’s sons, he’s possibly better known and recognised in South Africa than in his home town, however he deserves a place in the history of the town. He is buried in the older part of Fetteresso Churchyard on the North wall.

My thanks to John Ellis’s great nephew Marischal Ellis who provided a lot of the information for this article.