Mackie Cop it at Redcloak 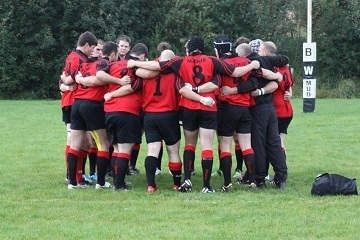 After a two week break from Caley League 2 action, Mackie were hosts to North Police in a game transferred to Redcloak as their Woodside pitch was unavailable.

First blood went to the boys in blue with an unconverted try giving them a 5 point advantage. Mackie were stung into action and a quick short penalty led to a try for winger Lyle Venters, well converted by Kyle Mair.

With the Stoney boys now 7 – 5 in the lead they kept their foot on the pedal and two excellent offloads by Ross Hartley and Rich Leadbetter led to an rousing try from Dean Gerrard.

With half time beckoning, Mackie pressed down the right wing and then a flowing move gave them a try for Ross Hartley on the left.

Police tried hard to narrow the gap before the break, but a try-saving tackle by captain Ross Gray kept the the half- time score at Mackie 17 – 10 Police.

The wheels then came completely off  the Mackie bus. A combination of sloppy handling from Mackie, excellent strong running from the visitors, and soft tackling from the boys in red, gifted 5 tries to the Police. The score was now Mackie 17 – 43 Police – and we were only 20 minutes into the second period.

The game seemed gone, but to give Mackie their due, they were determined to bring a modicum of respectability to the scoreline. Their reward came with 2 more well-worked tries from Dean Gerrard and Lyle Venters.

This left the final score at Mackie 27 – 43, giving Mackie their first bonus league point of the season.

For 2/3 of the game Mackie more than held their own against strong running well-drilled opponents, and played some entertaining and enterprising rugby. However in that disastrous start to the 2nd half they were architects of their own demise.

It doesn’t get any easier for Mackie as next week’s game is another home game against the formidable 2nd Highland from Inverness.