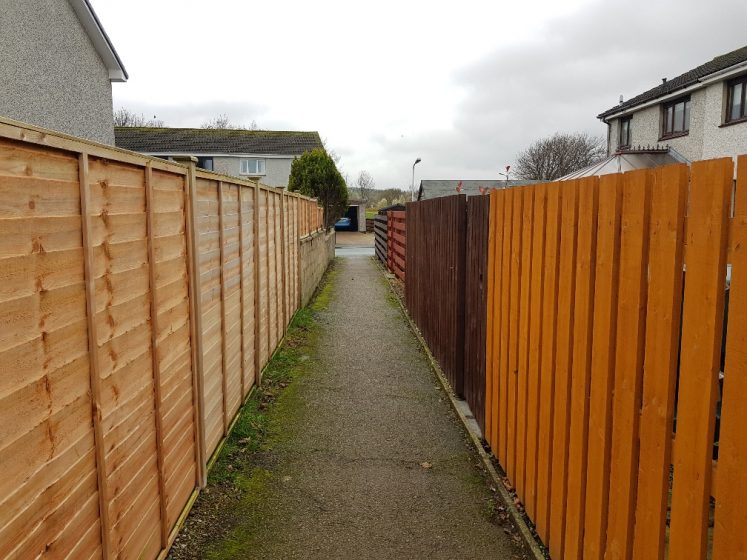 The paths of my childhood by “The Mearns Rover” –

There is a hidden side to Stonehaven, which as a child I loved. I suppose it is common to all villages, towns and cities, but it requires local knowledge built up from years of exploring … the often-unknown paths that connect one street to another.

I grew up in the Edinview housing development, which sprung up in the town in the early-1970s, around Mackie Academy, which had been built in 1969.

I spent my early years in and around Martin Drive, which backed onto a large field – formerly a dump (the field is still there today). Many matches of “World Cuppie” were played here, where every player represented a country and had to score a goal past the keeper to make it to the next round. I remember leading Brazil, Scotland – and once Forfar! – to glorious defeat on that park. Once my dad and my next-door neighbour’s dad, took it upon themselves to build a set of goalposts each from wood they had lying around. They even had orange nets. The day was spent constructing the posts amid growing excitement and the late afternoon bore witness to a mighty football match, the heroics and outcome of which have faded from my ageing memory!

Back when I was small, Martin Drive only went up as far as around No. 30. Now theres a fork in the road there, where the Drive splits in two and continues, to the left to join with Park Drive and, to the right, twists and turns until it reaches a circle marking the end of the street, close to Kincardine Hospital.

But back then, a step beyond No 30 took you into a wilderness of brush, veined by a rabbit warren of paths and full of kids’ dens. On summer days the local kids would run riot through these paths. As a nipper the area seemed huge … hundreds of acres of wild land where we could run free. I remember the bushes towering over me as I scurried through the paths. I also remember asking my dad to build me a tree house in one of the trees, which now line Farrochie Road. I pictured myself lording it up there, reading Beanos and hoarding sweeties in my little hideaway. Dad humoured me and my imagination continued to add rooms and features to my house in the branches, but, predictably (we didn’t own the tree!), the real thing never materialised.

Where Farrochie Road and the streets beyond now sit, there used to be a barley field and to the side of that some very marshy ground with spiky marsh plants. In Spring this is where we went for frog spawn. Collect some in a bucket of water and take it home to the back garden where the tadpoles would hatch (Chris Packham from Springwatch would probs have me for that now).

At the back of the marshy field, I remember a rope swing attached to a grand old tree, which was one of a line of six or seven, all at the time seemed over 100 years old. I think some of these trees still remain, and they now separate Canmore Park from Auchenblae Road, which brings cars in off the dual carriageway at the Spurryhillock Junction.

Everything else is long gone now – bogs dried out, brush cleared and fields bulldozed to make way for all the houses in Canmore Park, Lily Loch Road, the Farrochies and the Redcloaks.

In the age of the internet, everything is so accessible now – you can Google your own house and see on the screen all the surrounding streets and houses around Stonehaven.

However, one thing they haven’t captured yet are the paths and alleyways around the town. For every kid growing up in the 1980s – and who knows, perhaps even up to today (do kids go out and play anymore?) – these paths were vital local knowledge for short-cutting to your friend’s house, for escaping any marauding bullies or for wide-ranging games of hide and seek / manhunter / stringy onions.

There is the path that goes from Martin Drive (just beyond Martin Avenue) and links to the bottom of Hunter Avenue. Cycling through here saved a significant walk to a pal’s house in Hunter Place!

And that wasn’t the end of it … if you come out the end of that lane and walk across the road, you’re straight into another path, a real narrow affair which was tough to ride your bike down without hitting the sides. It seemed to go on and on, between back gardens and walls, eventually spitting you out at the end of Hunter Drive, where only a low wall and some garages separated you from the end of Martin Place.

But wait, there’s more! Cross the road again and the path there opened out into a wide, tree-lined expanse (almost a park), which led you out to the bottom of Park Drive. This one always puzzled me – it was like a high-walled exotic secret garden, hidden from the world.

Adult me thinks: Why didn’t they just extend peoples gardens back to better use the space? But child me loved it and I can almost smell the bubble gum as I pedalled through it (avoiding puddles and dog poo) onto Park Drive.

From that path, hang a left and you traverse another short but bike-friendly trail that trundles you onto School Road. Up until recently there was a large open space adjacent to the end of School Road (as the name suggests it was originally designated for a school), upon which Edenholme care home now sits.

Now you’re out onto Google car territory for a while – down School Road towards Hunter Place. Hang a right here and head to the end of the road … a dead end?

No way man. Almost at the end of the street, take a left behind a wall and onto a path that runs parallel to the burn (Farrochie Burn?). You come out onto Farburn Drive and, pushing on with your BMX (mine was red and yellow) cycle in a straight line across the road (mind your green cross code) and, keeping level with the burn, join onto Denis Roger Lane (to give it its Sunday name). To me this was – and will always be – the “No Horses” path.

A left from this point would take you to Slug Road and into town. A right however takes you up to the train station. Past that and down, under the bridge, up a bit of Arduthie Road and turn right into Ramsay Road. If you were playing the Playstation game “Grand Theft Auto”, turning into this street would be transitioning from one neighbourhood to another. “Brickfield” would flash up on the screen as you entered.

Since Brickfield is not my native precinct, I am generally ignorant to the nuances of the estate, and don’t have much knowledge about the tricky lanes that carry you swiftly from one street to another. But there is one notable lane that has always stuck with me.

Pedal your BMX down the long and straight Ramsay Road until you come to the end. Somewhere across from there, on Thomson Terrace, is a very non-descript opening to a muddy lane, which used to be lined with one of those wire and stick fences on either side.

This relatively short and muddy path was actually the entrance-way to a wide-open expanse, and a footballing field of dreams known as “Little Hampden”. I rarely displayed my footballing prowess there, since it was so far from home for a small kid. But I did witness some epic matches being hammered out on the hallowed turf. And it has always stuck with me as a hidden gem, known only to the local kids!

Stonehaven has a lot more paths like this, but these were the main ones I used to pass through, on my way to growing up.

I wasn’t around in Stoney growing up in the 70’s but I can relate your story to much of my childhood.
Lovely story.

What a great story, well done