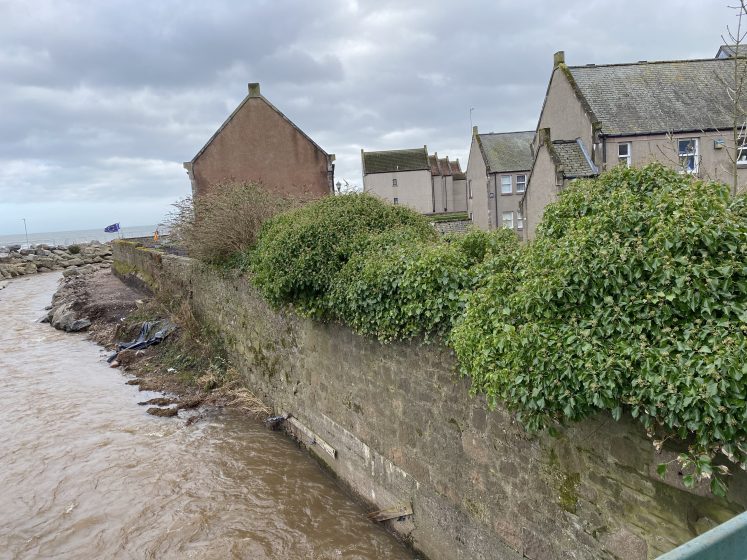 PLANNERS have backed the Carron River flood protection scheme contractors who say a listed wall will have to be removed to allow the works to continue safely – and who have applied for listed building consent for its demolition and subsequent reconstruction.

The structure in question forms the rear boundary for properties in Arbuthnott Place, Carron Springs, Bowmount House and Burnside. It was given category C listed status in 1980 and is within the Stonehaven conservation area.

Some 13 objections to the application were received, citing concerns including the loss of character and heritage of the wall, and the impact on the stability of the remaining section not earmarked for demolition.

Graeme Thain told The Bellman: ”I am as concerned, as most Stonehaven residents must be, at this application to demolish this 150 year old C listed sea wall.

”It would appear that the reason that this is deemed necessary, is to allow the construction of a walkway along the river Carron, where none previously existed.

”This proposed walkway offers no flood protection benefits, indeed the construction will effectively reduce the width of the river by two meters, at its mouth.”

He added: ”Any cost benefit analysis which was done previously will be blown out ofthe water by the additional cost of the demolition, storage and reconstruction to the specification demanded by the town planners in their report to go before the local planning committee on Tuesday.”

Demolition of the wall would not appear to be part of the original workscope for the Carron River flood protection works.

A structural survey undertaken in 2019 indicated the wall was in generally fair condition. The report conclusion noted: ”Due care and attention will need to be exercised when working adjacent to the wall and some temporary barrier protection would be advisable especially at sections where there are pockets of missing stones.”

Now, McLaughlin & Harvey say the depth of excavation required adjacent to the wall means it would be unsafe to undertake the work without demolishing it first.

Their public relations officer Sheila Tolmie said: ”One particular section of the floodwall construction is to take place on southside of River Carron adjacent to existing boundary wall separating properties 19, 21 and 23 Arbutnott place/Carron springs from the river. This requires piled foundations in the form of a secant wall to be installed ahead of the main flood wall structure construction.

”The proximity of this new flood wall to the existing boundary wall and depth of excavation required to construct new wall is such that the listed wall may become unstable while the excavation process takes place – and potentially collapse.

”Our first priority is always the health and safety of our workforce and after consulting our temporary works designer on this they have reverted with an assessment that to construct the wall safely would require a temporary works structure to be installed adjacent to new flood wall before excavation works begin.

”The temporary works would take the form of interlocking sheet piles that would need to be driven to a designated level by either a vibration hammer or use of an impact hammer. Both of these techniques create a significant amount of vibration which would compromise the integrity of existing wall causing damage to the wall and potentially making the wall unsafe.”

The Kincardine and Mearns Area Committee meet in Woodhill House on Tuesday March 3 at 9am. Members of the public are welcome to attend.

The committee papers can be viewed here