Why Stonehaven is Called Kilwhang 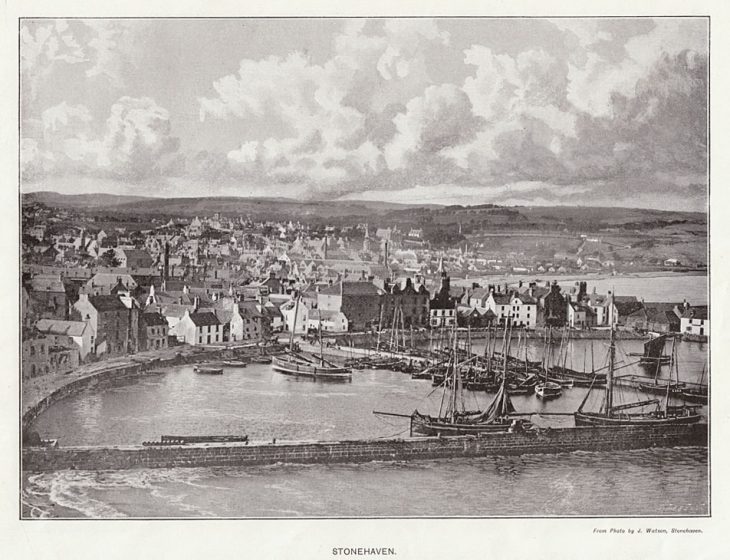 Recent references to Kilwhang on Facebook got me wondering again why Stonehaven got a name that I long suspected was made up. While searching the British Newspaper Archive on line for a totally different subject, I was delighted to come across many references to Kilwhang.  The attachment is a short summary of my research. Please consider including it in your Heritage section.

Delighted – thank you very much Joan …

The statement that Kilwhang is the old name for Stonehaven is frequently quoted in references to the town, but never with any mention of its origins.

As long ago as July 1902, an article in the Stonehaven Journal asked  “why the good, old nickname Kilwhang?” but got no further than declaring the familiar by-name was accepted by everybody with much good humour. Fortunately the answer can now be found in old newspapers from the nineteenth century now digitised and made available in the British Newspaper Archive.

In an introduction to verses entitled “The Links o’ Kilwhang” that were published  on 11 October 1856 in the Aberdeen Herald and General Advertiser,  the writer, identified as Andro in Stonehaven, claimed to be a native of the local area who had unexpectedly been granted three weeks leave from the city. His destination was Kilwhang and it is from his “wee room” there that Andro (or Bachelor Andro) writes many verses and articles published in the Herald over the next couple of years. He chats with a local cranky crony

Sic clashmaclaver as I gotten

I widna say I aye believed it

But here hae ’t as I received it.

Andro makes fun of life in the small town he calls Kilwhang but it has physical features much like Stonehaven, as he describes his walk from the new town to the old town listening to the sound of the weavers at work in the Links of Arduthie.

The wives o’ Kilwhang were like nae other wives according to Bachelor Andro and his many amusing examples of petticoat government show they and “their dochters wad ban/ The woman that bends in subjection to man.”

His verses must have been very popular because one issue of the Herald carried an apology to its readers that lack of space had delayed publication of the next set and promising they “shall have, as it deserves, our special corner of honour.”

Bachelor Andro also got involved in local issues a favourite target being the unfinished state of Kilwhang’s steeple. As he put it, “I’m eager eneuch for defendin’ Kilwhang/ But I manna be hindered frae mendin’ Kilwhang.”

Andro was a prolific writer and among his verses, sonnets, letters to the editor of the Herald and long-winded sermons, there was a serious poem about the tragic end of Lummie, a man “far famed for convivial feats and disregard of convention.”

For several more years references to Kilwhang by anonymous authors appeared in the Herald.  In 1870 the Stonehaven Journal carried on the tradition by publishing a proposal for a Kilwhang Athletic Club to promote physical and mental exercise, bairnly frolics, for people who would not “gang the length o’ the Brig o’ Cowie to hear a debate between Gladstone and Disraeli.”  The Journal also published a song dedicated to Kilwhangians everywhere, with the theme of “ne’er a spot on earth so dear/ As oor renown’d Kilwhang.”

“Lummie” originally published in the Herald in 1857, was reprinted in the Press and Journal on 3 September 1938 with some complimentary words about its artistic merit. It is here that the author’s name is revealed to be Alexander Taylor. He was born in 1823 on a farm in the parish of Fetteresso and was apprenticed to a group of lawyers in Stonehaven before moving to Edinburgh where he was a law clerk in a large law firm.

There is a rumour that the Local Authority intends to state on an information board that the original name for Stonehaven was Kilwhang. That seems to be without substance. There is reference to Stonehaven in an Act of the Scottish Parliament:-
“… villam de Stanehyve cum libero porta et lie havin sylver et parvis custumis, anchoragiis etc., et omnibus privilegiis burgi baronie … “, item 1341 at Falkland 5 Aug. 1587 (21 James VI). This charter of confirmation lists the lands belonging to George, Earl Marischal. This is prior to Stonehaven becoming the County Town of Kincardineshire. Hopefully, if this is the Local Authority’s intention, they will produce some evidence for their statement. From my researches, none exits.

So the town was never known as Kilwang! It was just the invention of Andro, just as Kinraddie was the invention of Lewis Grassic Gibbon.
Certainly Kilwang is never mentioned in any way when you look up ‘Stonehaven, Stony, Stonehyve or Stonehive.
Archibald Watt doesn’t mention the name in his ‘Highways and Byways Round Stonehaven.