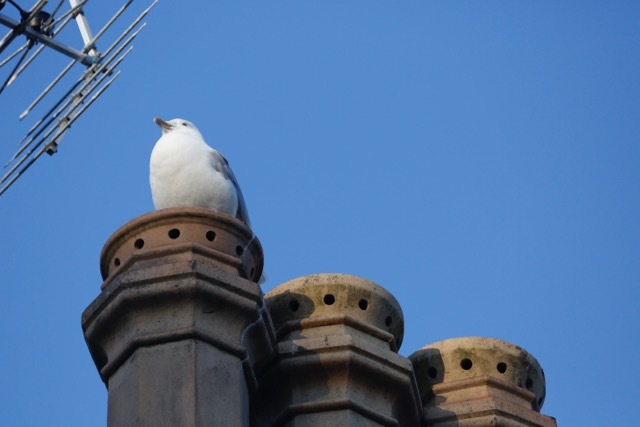 THE removal of seagull nests and eggs in the town centre is not going ahead this year as insufficient residents and businesses are willing to contribute to the cost.

If you look to the roofs and chimneys of any property around the Market Square, you are likely to see a Herring Gull perched there, admiring the view and making itself at home.

The birds, which are a red-listed species of conservation concern, will shorly begin nesting and laying their clutches of 2-4 eggs.

In previous years, the Town Centre Improvent Group (STIG), a collaboration between Aberdeenshire Council and local community groups, contracted specialists to remove nests and eggs during the mating season – but only after a reasonable amount of property owners agreed to pay a share.

Aberdeenshire Council have, in the past, made a contribution, but as as clearing nests on private property is not one of its statutory functions, there is no budget for the cost – which last year was £6,450.

Efforts to Raise Cash Have Failed

Any move to remove Herring Gull nests is further complicated by new Scottish Natural Heritage licence requirements. An application would have to be made soon.

This year, of the 290 residents/businesses contacted, it appears only 59 agreed to contribute to this voluntary scheme, leaving the STIG far short of the required amount – and not enough to merit a licence application.

Participating resident Linda Johnston told The Bellman she has been contacted to say the works will not be undertaken this year.

She said: ”This is a pity, as over the past couple of years it has been done, I have seen a definite decrease in gulls on the rooftops, as when they realise the eggs are not going  to hatch they head off back to sea.

”This means a lot less mess on the streets and cars and less attacks on folks in the street.

”Already the gulls are starting to come back to the nest sites and screeching to defend them.”

According to the RSPB website, the number of breeding pairs has almost halved since 1993 to 378,000 pairs.