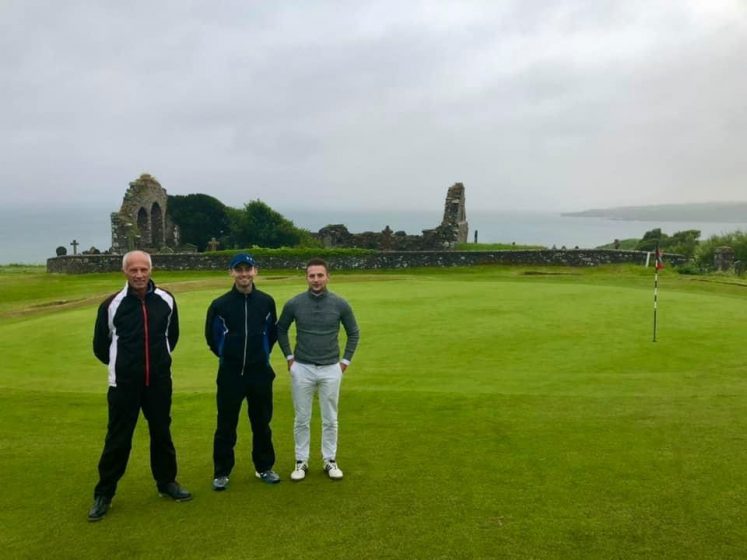 Kevin Ridell is the 2021 Stonehaven Golf Club champion following a hard fought battle with the Irvine duo, Craig and Neil, each of whom have won the championship multiple times in their own right. It was a closely contested affair, Kevin holing a nerve jangler on the final green to prevail by a single stroke. The first three rounds had been played in benign conditions but the last proved much more challenging as dank, windy conditions, and the occasional squall, disrupted momentum.

While an apparent three horse race going into the final round, excellent performances were recorded by several other competitors, not least Fraser Stark and Barry McGillivray who finished fourth and fifth respectively. The club is blessed with many fine golfers and the community spirit is never better demonstrated than by the camaraderie shown in the club championship. It’s been a tremendous tournament with the 122 initial protagonists finally being whittled down to one victor. Congratulations Kevin on achieving your second club championship title.

A squint at this week’s junior section results suggest the club champions of tomorrow are already jockeying for position. Connor Dalglish shot a gross 68 to win the Junior Medal and there were several other highly creditable performances in this event and  the Stableford competition too. The club’s future looks to be in secure hands with the next batch of top quality golfers already making themselves known.

The Ladies section enjoyed a couple of low key events after the rigours of their club championship the previous week. The 3 clubs & a putter competition does what it says on the tin; ten clubs left in the locker room with the remaining four taken out onto the golf course. It’s astounding how often the scoring for such a competition betters scores achieved when players have access to their full weaponry. There’s a lesson for us all there! Jacqui Blackburn won this one and the Greensomes event was won by the Pam Droy and Janet Owen combo.

There’s sometimes an ‘after the Lord Mayor’s show’ feel the week following the club championship. Try telling that though to Stuart Wright who notched a hole-in-one on the 18th the very next day in the McNab Trophy. There’s never a dull moment at SGC.

We leave the annual championship behind then and look forward to plenty more competitive golf, a bulging fixture list remaining between now and the winter season. If you’d like to be a part of our club we’re always open to visitors and new members, do please come and join the fun.