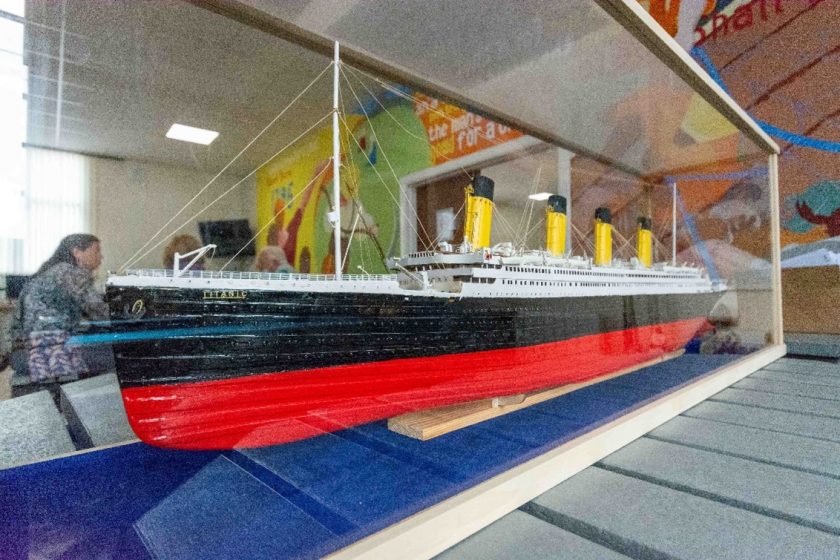 At 2340 hours on 14 April 1912 the RMS Titanic of the White Star Line, struck an iceberg and has since earned her unenviable place in the folklore of maritime history.

RMS Carpathia, Cunard Line, was 58 miles away and navigated the ice fields to arrive four hours after the Titanic had sunk and over the next few hours her crew rescued 705 survivors from the Titanic’s lifeboats and returned to New York where they arrived on 18 April 1912.

One of the quartermasters aboard the RMS Carpathia when it sailed from New York on Tuesday April 11th, 1912, was John Ritchie Cargill. John who was born in Gourdon, Kincardineshire. During WW1 John was a sergeant in the Black Watch and was awarded the Military Medal (MM). In WW2 he again enlisted and served with distinction being awarded the Distinguished Conduct Medal (DCM).

John’s grandchildren are trustees of the Maggie Law Maritime Museum in Gourdon, South of Aberdeen.  The museum had received a model of the Titanic, in kit form, from local resident Allan Hay.  Allan had purchased the kit in magazine format, over a period of two years, and was keen to see it built and residing in the Maggie Law Museum.

Allan, and the Maggie Law Maritime Museum in Gourdon approached Stonehaven and District Men’s Shed and asked if the Shed would be interested in assembling the kit for display in the museum. This was agreed and the model kit, with accompanying drawings etc, was handed over on 13 February 2020.

A team came together with intention of assembling the model, in house, but then Coronavirus struck, and lockdown was affected!

The “Titanic” curse strikes again!! However, trustee Ian Smith, took the model parts and instructions to his home and spent his COVID locked down days working on the model assembly.  As he lightly puts it, “It kept me sane!”

The Shed, on behalf of the museum, obtained a custom-made display case and the model, in its case, was handed over to Sheena Taylor and Allan Hay on 17 August 21 at the Shed.

The Maggie Law Maritime Museum is planning to re-open its doors early in 2022 and the RMS Titanic will be one of the centrepieces displays of the museum.