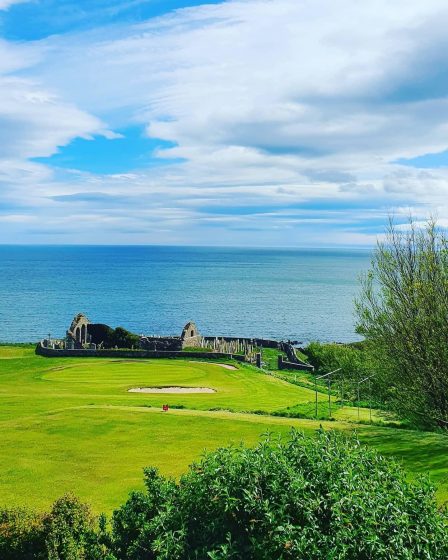 (Thanks Jennifer Reid for the photo 👍)

The highlight at Stonehaven Golf Club this week was Captain’s Day, el capitan Ian Wood laying on a nose bag and refreshments for the 120+ participants. Burgers, beers and juices were the order of another warm day and the scoring was largely impressive, aside from those taking advantage of the complimentary refreshments before their round instead of after.

The event was won by Craig Watson, his better back nine narrowly nudging Douglas Barnard into second place while Fiona Lamont won the Ladies section at something of a canter. The juniors joined in the fun, Jamie Sutherland topping the table with 37 points, and a good time was had by all.

There were three additional prizes to be scrapped over along the way; Stuart Wright beasting the day’s longest drive on the 8th, Gordon Wood sliding his spherical nearest to the pin on the 18th and Ali Robertson angling his tee shot closest to the white line drawn up the middle of the 1st fairway. Congratulations to all winners and a big thanks to Ziggy and the View crew for their sterling effort in feeding the entire field throughout the day.

The midweek competitions were also contested in fine conditions, the summer really has spoiled us this year. Stuart Paul triumphed in the Stableford, marginally beating  Russell Duncan (spurred on no doubt by the veiled mocking, during the club’s weekly radio show, of his recent performances). The Bill Adams Memorial Trophy was won by Peter Beatt and Ewan Kirkpatrick and on Thursday the Ladies Stableford saw Yvonne Scott victorious . It was a week for Stableford competition, that most forgiving of formats which mercifully doesn’t allow the occasional nightmare hole to wreck your scorecard.

Earlier in the week a writer from a national golf magazine journeyed to sample the beauty of Stonehaven Golf Club for himself, the club’s reputation growing far and wide. He played the course in beautiful conditions on a very pleasant evening and we look forward to his write up in a forthcoming edition, we’ll let you know when it’s published.

For more club news,  the aforementioned weekly radio show is broadcast every Monday at 8pm on Mearns FM and available on the Listen Again function on the station’s website.