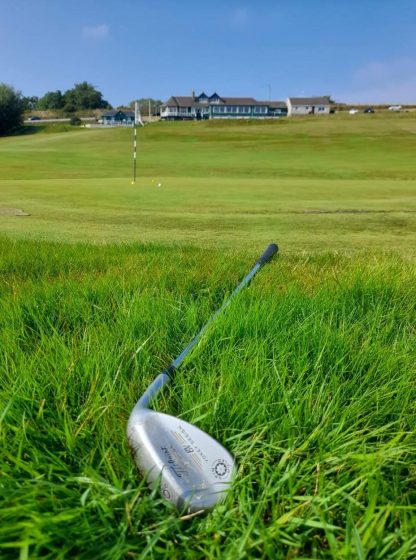 Willie Donald was a member of Stonehaven Golf Club for many a decade before his sad passing in 2017, devoting himself to the club and barely a day passing without his appearance up at the club. Each year Willie’s name is commemorated with the playing of the Willie Donald Champions Trophy, an end of season event with the year’s competition winners competing in a strokeplay event. It was Raymond Shearer’s honour to emerge victorious this season after Saturday’s close fought encounter, his nett 61 narrowly nudging Richard Hampson into second place. The event capped another splendid week at SGC, the excellent scoring in each of the weekly competitions matching the tremendous conditions.

Given recent postponements due to bad weather, the Captain’s Cup and Innes Medal Final were played concurrently with Willie’s commemorative trophy on Saturday. The former was won by Steve Guzik with a gross 65 and the latter by Bob McAlpine, no mean feat for both gentlemen given there was a field of 103 competitors. Top darts indeed.

The midweek Stableford saw some truly remarkable scoring, on any other day the results from second position down to sixth would doubtless have secured victory. Nobody reckoned however on the exploits of RD Jenkins who’s 45 point haul blew allcomers away. To give you an indication of just how good the winning score was, had major champion winner Sergio Garcia competed with the +6 handicap he held as an amateur, he’d have required a gross round of 50 to win it!

The Ladies Stableford proved the closest fought competition of the season, no less than five players amassing 37 points and Raqnhild Ericsson winning on countback, deservedly so given her fine birdie on the final hole. The Ladies Section also enjoyed a greensomes competition, Doreen Seery & Jacqui Blackburn coming out victorious by a two stroke margin. Doreen’s relatively recent return to golf proves you never lose it, she’s won so many comps this season that she’s run out of winning speech material and Jacqui’s handicap continues to tumble.

The Junior Section is still coming to terms with the end of the school holidays which had given them carte blanche to play golf ceaselessly for seven weeks straight. The juniors pack school books in the mornings now though rather than golf caps and sun cream, but competition awaits at the weekend. This week the 9 hole Stableford was won by Lewis Moir who scored a solid 18 points while James Boggon finished runner up on 14 points. The tattie holidays aren’t far away, their withdrawal symptoms won’t have to last much longer.

So to the results….