A Murderous Tale Behind Latest Sculpture on Boardwalk 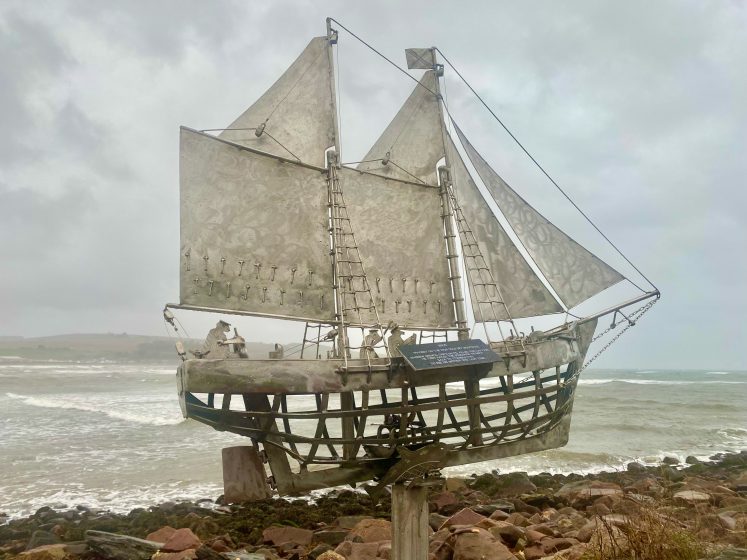 TODAY’S grim and blustery Hallowe’en weather was perhaps appropriate for the dawn installation of the latest boardwalk sculpture – marking a brutal murder at sea.

It was a small crew of four who set sail aboard the schooner Nymph when it left Montrose for London in September 1865, with a cargo of floor timber.

At around 5pm the ship was passing Red Head at Lunan Bay. Captain John Greig declared himself tired by the afternoon heat and lay down on the deck to rest. Asleep, he was defenceless when the ship’s mate Andrew Brown struck him with three deadly blows of an axe, cleaving his skull in two.

The grisly scene was discovered by tillerman John Pert, who heard the thuds of the first two blows. Fearing for his own life, Pert grappled with Brown to retrieve the axe and throw it overboard before any more blood could be shed.

Brown made no attempt to deny his crime, merely saying he was ‘going stark mad, out of my mind’. Pert and the remaining crewman Alexander Raeburnes were clearly in fear for their safety – so they acquiesced to Brown’s request to turn the schooner round and head back to Stonehaven, so he could see his mother for one last time.

You can imagine the consternation at the harbour when the Nymph, with its gruesome crime scene finally docked. Two of Brown’s uncles guided in the schooner only to see Pert and Raeburnes rushing off in their haste to report the murder to the police.

Was the 25-year-old Brown drunk and insensible? Was he the victim of earlier head injuries that affected his mood and personality? These were the questions and mitigations put to the jury when Brown eventually went to trial pleading insanity. The verdict was not merciful – Brown was sentenced to hang.

Apparently the townsfolk of Stonehaven were disgusted the execution was directed to take place in Montrose. Brown was imprisoned in Forfar until January 31 1866, when he was transported by a special train to George Street, Montrose. There, before a crowd of around 2,000, the notorious hangman Calcraft dispensed justice to Brown in the last public hanging in Angus and one of the last in Scotland.

The stainless steel sculpture is of course the work of Stonehaven man Jimmy Malcolm who started producing his humourous tributes our local heritage some 20 years ago.

He said he learned of what became known as the Red Head tragedy through a friend who was a distant descendant of Brown.

”We were talking about it and I said that was just the thing to do,” he said. ”There is a lot of history in Stonehaven that people don’t know about.”

Mr Malcolm’s friend provided him with all the historical information he needed – but there was one detail he could not establish – the exact design of The Nymph.

He said: ”We couldn’t get hold of a picture of the boat. Every yard had a different take, so no two schooners were the same. So what you see is an interpretation.”