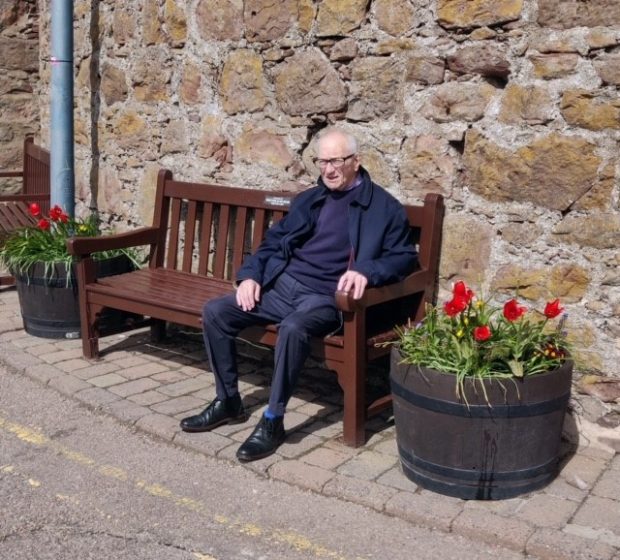 STONEHAVEN lost one of its best-loved characters on Saturday January 15, with the death of Charles McHardy, known to all as Charlie.

Tributes are already flooding in for a man who was shy at heart, but who will always be remembered for the courteous greeting and cheerful service extended to every visitor in his Market Square butcher shop.

Charlie’s family lived at Keith Place when he was born in 1943. And the butcher trade was in his blood, with a family business at The Cross first opened in 1907 by Charlie’s grandfather. By 1967, the shop had moved to Barclay Street and then to its current location Market Square in 1975 and the name plate above the door proclaimed Charlie’s ownership. His brother Kenneth joined him behind the counter serving locals and visitors alike with top quality meat and products – such as their haggis that was posted across the world each year for Burns’ Supper celebrations.

Kenneth sadly died in 1999. By this time, Charles McHardy was a name of renown in the British retail meat industry with its elite Q Guild membership.  Innovative products were rewarded with Smithfield Golden Diamond Awards for best in category. In 1994 Stonehaven boasted the Top Butcher Shop in Scotland, a title Charlie retained until 1996 only to go one better in 1997 when his business was crowned Top Shop in the UK.

This latest accolade even hit the news in Holland, thanks to a delegation of butchers who came to Stonehaven to see the range of products on offer. In this way, Charlie was kind and generous with his time, welcoming school trips, and giving talks for the talking newspaper and for the rural WRI groups of the Mearns.

Charlie was more than a successful retailer.  He was a truly contented local who cherished his roots in Stonehaven. Despite the loss of his mother when he was just ten years-old, the young Charlie enjoyed a full and active life: he was a keen footballer, playing for both his school and the Montrose Vics; he was a member of the Air Training Corps; and he was a keen salmon fisherman with Gustave De Jonckheere.

Charlie married his sweetheart, Lyn, in 1964. Their daughter Dawn soon completed a very close family, who shortly after moved to a new home in Woodcot Park. While Charlie always felt himself to be a ‘doon toon loon’, the family stayed put up the hill. And for sure the McHardys would never have considered life anywhere other than in Stonehaven. Charlie once quipped he had seen everything and he had done everything, as he’d been to London – so he didn’t need to see or do anything else.

Dawn recalls loving parents who were devoted to each other, enjoying lively, sparky conversation. And if you are wondering what an award-winning butcher liked for his supper after a long day in his shop? Meat and two veg of course, though he would eat turkey at Christmas.

Retirement beckoned in 2005. With his liberated time and energy, Charlie helped at Jubilee House, was a member of both the Rotary and Probus Clubs and, as a member of the 50 Club, cheered on The Dons. And he went for walks every day with his friends, who would conversationally put the world to rights.

The death of Lyn in 2018 was a blow from which Charlie never recovered. His health failed and he started kidney dialysis at the Kincardine Community Hospital in 2020. Typically, he took great pleasure from both the care he received and the banter with both staff and fellow patients.

And even to the last, when he was being treated in the intensive care unit of ARI for complications following a Covid infection, he was regaling the nurses with tales of Stonehaven – the town he loved.

Charles McHardy is survived by his sister Jean, his daughter Dawn, son-in-law Robert Swanson, grandson Blair and his wife Erinne, and great-granddaughters Bronte, Blythe and Romilly. His funeral is expected to take place on Tuesday February 1. Full details will be published in the press once confirmed.

Charlie will be missed by everyone who knew him. I had some great conversations with him always laced with comedy. RIP.

I was really saddened to hear of Charlie’s passing. I will miss him, but I do have lots of great memories to reflect on.
Charlie was a really nice decent person. RIP.

Charlie was the one man who made me smile everyday I saw him.
I met him later in life but he was the best version of a human being I’ve ever met.
He had the most amazing sense of humour but also a tender empathy for people. The best mix.
He impacted everyone he met, no one ever forgot him once they met him. He loved people, his family, his life.
I will always be honoured to have known him.
Sleep well ye wee cracker ye

Old school in the very best sense. A true gentleman, proud of his roots and highly skilled at his trade. Will be much missed by so many.

Sadly missed ,our thoughts are with the family ,moira and James mc lean ,RIP ,

A weel Kent hero of Stonie allways a laf or two when u met Charlie hel b sorely missed by all in Stonie, was a sad day hearing of his death…karinmarshall@btinternet.com

Sad to hear of his passing. Such a good Stonehaven man.

Fondly remembered by our family for over 50 years of good business, promoting local produce. Our thoughts are with his family.

So sorry to hear about Charlie. Kenny and I were pals at the Mackie and I saw Charlie many times when I was back in Stony.
McHardy’s is an institution we Stony folk will never forget.

Rest in Peace old friend , you will be sadly missed . Betty and Billy Straiton

First met Charlie around 27 years ago. I lived in Aberdeen then but passed through Stony with work. Went into the butchers and was greeted with Fit Like and a great big smile and a bit of a story. Every trip through Stony from then on resulted in buying something from Charlie. 2 years later I moved to Stony as a direct result of Charlie’s influence and banter and lust for life. It was a great move made greater by years of butcher and street banter with Charlie. When he left the butchers he still wouldn’t walk by in the street without stopping and seeing how things were going. I will fondly remember Charlie and his stories, laughs and of course slipping me a pun of mince for a couple of quid now and again. Gone but never forgotten.

Deeply sorry to hear of Charlie’s passing – he will be truly missed – what an ambassador for Stonehaven. RIP Charlie

Charlie was a tremendous fund of knowledge about Stoney. A million stories about the old days. Will be sorely missed