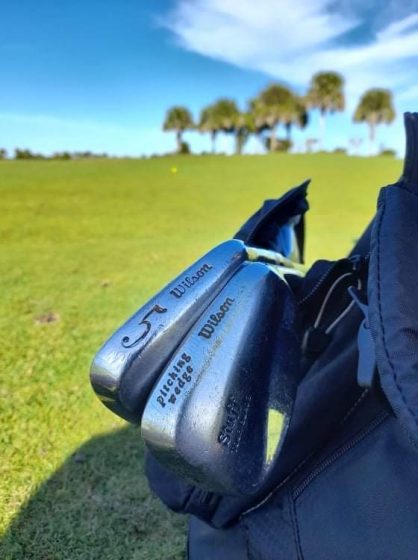 Your roving golf reporter finds himself in sunny Florida this week so this latest missive comes gilded with sunshine. It’s not warm here though, I brought the Scottish temperatures with me and Florida is now suffering its coldest week in twelve years. They can’t wait to send me back.

I’m here in Boca Raton for two reasons; firstly to visit my brother and secondly to commence my preparations for Stonehaven’s club championship, now barely six months away. Many of the world’s top sportsmen spend their pre-seasons in warmer climes and I’m no different. Andy Murray favours Miami, just down the road from Boca, and a string of boxers come to Florida to train before big bouts, so it makes absolute sense for me to be here. And my commitment has been royally rewarded, who knew my brother still had my full set of 1986 junior championship Wilson Staff irons (see photo). I’ve already arranged for Virgin Atlantic to bring these bladed beauties back to Stoney and I propose to secure this year’s men’s title with them.

A lot of water must go under the bridge between now and the club championship though, not least the winter league which this week saw the completion of its thirteenth round. Alex Keith won the singles section with 40 Stableford points, the Gross doubles was won by the Irvine/Stark machine (61 strokes) and the Nett doubles was taken by the Bell father & son combo’s 55. With the winds picking up recently, how’s that for an understatement, the scoring was excellent albeit the field a smaller one than usual.

In the Ladies section familiar names found their way to the top, Janet Owen triumphing in the Ladies 12 Hole winter league as she scored 27 points to beat Sarah Forbes and recent ‘hole-in-oner’ Rose Menzies by a point. (Sarah rarely figures on the leaderboard so apologies if I’ve spelt her name incorrectly). Jan Bradford won the eighteen hole strokeplay event with a nett 64, Fiona Armstrong lying just a stroke behind.

The Seniors enjoyed their weekly 14 hole Stableford with Ian Smith winning the first division, John McMenemy the second and William Shepherd the third (as opposed to Davis Love III 😬). I don’t know what irons they use but my aforementioned 1986 Wilson Staffs might be familiar to them given they’re Seniors, also lapelled golf shoes, persimmon two woods and Penfold Commandos.