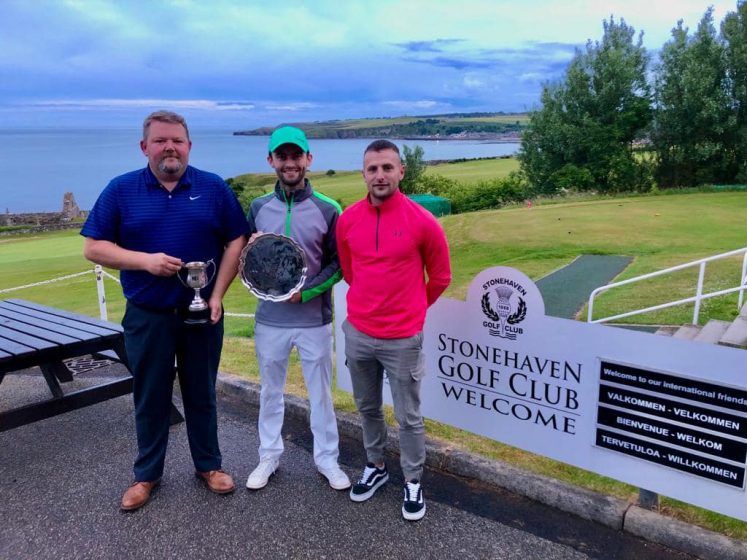 There was an element of deja vu watching Kevin Riddell and Craig Irvine stand on the 72nd tee of the club championship last Friday evening. Kevin, resplendent in his beloved Hibernian FC colours, held a two shot lead over his perpetual adversary Craig in a straight repeat of last year’s event. And history repeated itself, Kevin holding his nerve to come through. The congratulations of every member of Stonehaven Golf Club go to Kevin for a third championship success and also to Craig for making it such an exciting contest once again. Both are multi-time champions and a credit to the club in the way they play the game and carry themselves.

There was a healthy supporting cast this year too. Whilst the front runners stretched ahead of the field, a clutch of players proved their golfing ability with a competitive charge for the bronze medal. Third place was eventually secured by Kiefer Brown thanks to a splendid 66 in the final round, Kevin Murdoch winning the Gully Cup trophy (fewest shots played over Stoney’s notorious three gully holes) to finish fourth, just a single stroke behind Kiefer.

Aside from the top two, several players shot in the 60s during the event (Kiefer Brown, Kevin Murdoch, Fraser Stark, Iain Brattey, Ross McAllan, Stuart Dempster, Sam Wright) and if these individuals can string four of those beauties together next year we won’t be witnessing another two horse race. Look out too for the junior member duo of Jamie Sutherland and Thomas Dingwall who, to their great credit, achieved qualification for the final two rounds this year. Well done to them, two future championship contenders there’s no doubt.

It was good to see so many spectators turn out to watch the closing holes and to share Kevin’s gracious winning speech. The short shower didn’t dissuade them from offering much appreciated support, and thanks also to Scott James & Associates for their kind sponsorship of the event. It’s been a wonderful championship, even the weather behaving itself, we had blustery winds for the first two rounds but the only rain was a light sprinkle during the final round.

The club’s flagship tournament may be over but it’s only the beginning of July so there’s plenty still to play for, lots of golf yet to be enjoyed. Meantime, congratulations once again to Kevin Riddell, your football team might be allergic to silverware but thankfully you clearly aren’t.