A tale of those double doors 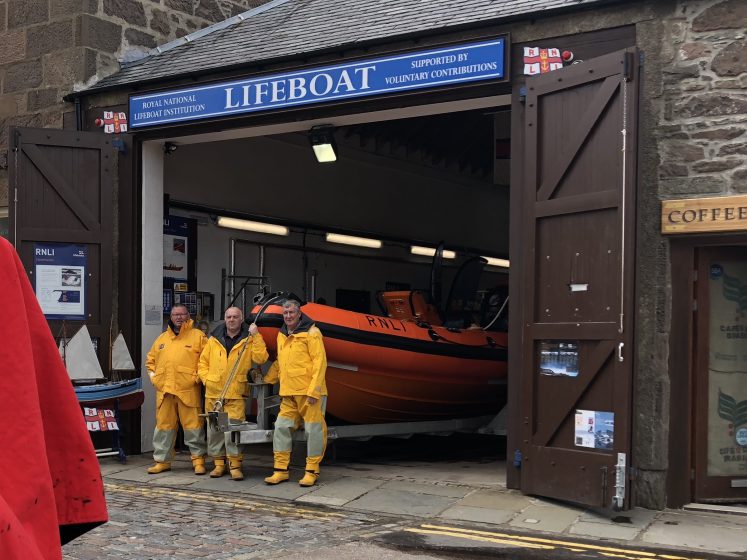 Though today we are proud to have a lifeboat station,  in 1934 the RNLI closed the lifeboat shed, much to the dismay and misgiving of the local inhabitants at the time.

An unknown author wrote an article in December 1934. It was published in the Mearns Leader and Kincardinshire Mail, and, “paid tribute to the men who have manned the lifeboat, regardless of their own safety.”

What follows is not the entire article, but a series of excerpts.

“A great double door, securely locked, that stares at you grimly as you pass by. It is summer and the sun is blistering the paint into little blobs here and there. In the harbour boats come and go, chuff-chuffing gaily as they potter about. Folks move to and fro on their various tasks or stand idly in doorways, but the big locked door remains unopened, undisturbed. Steadfast and grim, almost it looks as if it were waiting for something frightening and dreadful, something that has no part in sunny skies and soft, summer breezes.

“The great double door that stared at you so silently in the sunlight is creaking and straining in the gale, doing battle it would seem, with the fury of the storm.
“A rocket booms.
“The great double door swings open. Hurry, hurry down to the harbour. Drama and tragedy are walking side by side this morning. There, in the eastern sky is the dawning, pallid and grey, beneath it a welter of tormented water. Something else, a Ship, half smothered, battered, helpless, driving ashore to deaths and destruction.
“And beside you the great double door is opened wide. You see men heaving there at block and tackle, pulling and straining…. men are clambering on board….grizzled men with seamed, weatherbeaten faces. The oars swing back, bite into the water simultaneously. The Lifeboat is out.

“And you see her now, battling in the teeth of the storm, against the awful overwhelming ferocity of the elements, a cockleshell of a boat, propelled by wooden oars…. fighting inch by inch, through great buffeting waves.

“And at last in a welter of churning water the tiny lifeboat is ranging alongside the doomed vessel, splitting hairs with death as she manoeuvres closer and closer, backing a little, going ahead, completing her rescue work at length as the last man leaps down from the sinking ship. All aboard, and the bow of the lifeboat swings round to the long, laboured journey homeward….. safe homecoming of rescued and rescuers, the willing hands that help them ashore, that haul back to her inconspicuous home the gallant lifeboat.

“Just another entry in the log of a gallant boat.”

“The great double doors, securely locked once more, stares you grimly as you pass by.”

When you next see those great double doors open, please have a thought for the lifeboat. Inside on the wall is a blue plaque which gives account of Stonehaven’s lifeboats and crew.