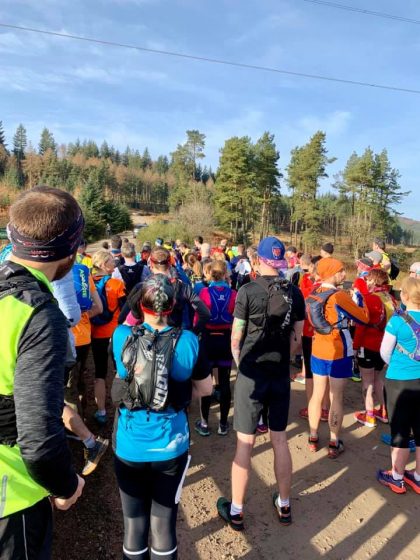 February 24th saw the return of the Fetteresso Forest Marathon, a trail marathon set entirely within Fetteresso Forest, a few miles to the west of Stonehaven. After a successful race in 2018, the 2019 race sold out just a few days after opening, and had a few elite runners sniffing around the online entry.
The race route is 200 metres longer than a marathon, and involves around 900 metres of ascent and descent, with very few flat sections.
The 2018 race was defined by two things, snow and ice. This gave the already challenging event a whole new level of difficulty, with runners needing to pick their lines along the forest tracks carefully to ensure they stayed upright and reached the finish. In 2019 however, there was no snow or ice to be seen. A freak-February sunny spell, meant the forest was all clear, and instead runners would be treated to blue skies and a warm forest.
The top three men from 2018 returned for the 2019 race, along with two of the top three women, leading to an exciting race at the front end. A fierce battle between Mark Mosgrove (Banchory Running Club) and Jason Kelly (Stonehaven Running Club / Metro Aberdeen Running Club) ensued from the get-go, with Mosgrove managing to edge ahead in the last few miles to take the win in 02:50:40, and Kelly dropping back to finish second in 02:56:39. Dwayne Batt (Metro Aberdeen Running Club) finished the men’s podium with a time of 02:57:14, which completed an exact replica of the men’s podium from 2018.
In the women’s race, newcomer Mary Lye (Carnethy Hill Running Club) was leading the way for much of the race, before being overtaken by Jeni Rhys-Jenkins (Insch Trail Running Club), last year’s runner-up, with Angela Reid (North Ayrshire Athletics Club) doing her best to chase Lye down. The women’s race finished with Jenkins in first in 03:42:48, Lye in second in 03:49:00, and Reid in 03:50:08, retaining her third place from 2018.
In the veteran’s categories, Pete Jones (Stonehaven Running Club) finished in 03:21:03 and Jacoline Day finished in 04:05:13 as the first V40 runners. Martin Mackinnon (unattached) finished in 03:30:48 and Tracey Sahraie (unattached) finished in 04:54:32 to take the V50 wins. All podium finishes and veteran category winners were awarded with small spruce trees as trophies to continue the forest theme, and to keep-in with the race’s minimal-waste philosophy.
The event is organised under the Stonehaven Running Club banner, with many of the Club’s members, in addition to other individuals, having a hand in the success of the event.
The event also successfully raised £300 for Connor’s voice. This money will go towards supporting a Stonehaven family’s efforts to help their autistic child, Connor Muir, communicate more effectively with his loved ones, and others around him.
Stonehaven Running Club is an inclusive running club who trains on Mondays, Tuesday, Thursday and Fridays in and around Stonehaven. For more information on the club, or the Fetteresso Forest Marathon, please visit www.stonehavenrunningclub.co.uk