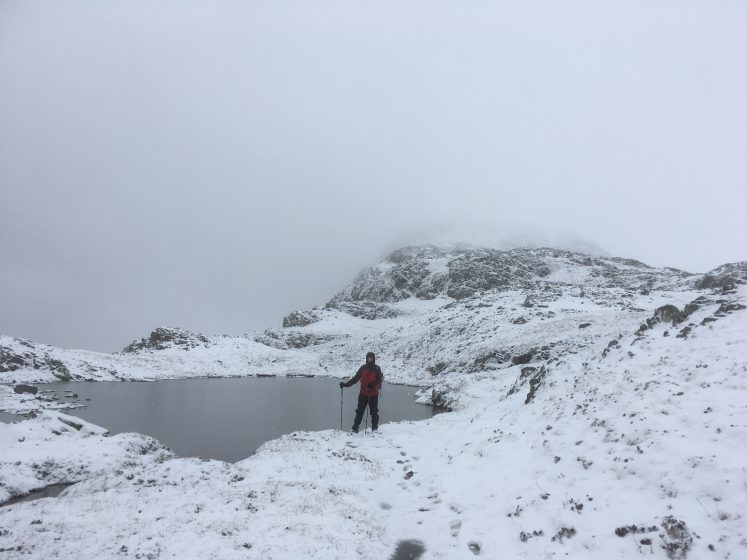 The weekend weather forecast was poor, and for Friday very high winds and snow/hail were being suggested. This had a marked effect on the ambitions of many Club members. Two groups attempted the Munro, Fionn Bheinn (933m) from Achnasheen. The high winds, squally showers, and deep snow defeated both, who sensibly turned back once the going became just too difficult around 200m from the summit. In the conditions they even managed to miss each other. Another group headed to Glen Cannich for an attempt on the Corbett, Sgor an Diollaid (818m). They managed to get to within 120m of the summit before the conditions drove them back and they too had to sensibly call it a day and retreat. Two members with slightly lower ambitions successfully reached the summit of the Graham, Meall a’ Chaorainn (705m). Heading up the long summit ridge with the wind on their back they suddenly became aware of an ominous blackening in the sky and an increase in the wind speed. Suddenly the pair were enveloped in a blizzard which almost obliterated the way ahead. Soon however they gained the summit cairn, quickly donned their goggles and headed straight down off the mountain to the start point.

Saturday was altogether a calmer day & although snow showers persisted there was little or no wind. The Munro Baggers headed for Beinn Liath Mhor (925m) & Sgorr Ruadh (960m) but were again defeated by the underfoot snow conditions and low cloud. Instead, they made a very pleasant circuit of Coire Lair. The Corbett baggers had hoped to do Meallan nan Uan (840m) and Sgurr a’ Mhuillinn (879m) from Strath Connon. In the event they only managed Meallan nan Uan before the tiring underfoot conditions forced a retreat. The two Graham Baggers headed round beyond Kishorn on the road to Shieldaig to successfully gain the summit of Sgurr a’ Gharaidh (732m) from Loch an Loin. Navigating this very complicated terrain in the conditions was considerably enhanced by the use of a GPS. The descent was much easier as they simply retraced their footprints in the snow. By the time the snow ran out the end point was visible. A group of 3 lowered their expectations for the weekend and headed for the Graham Carn Breac (678m). They decided to attack this up the long curving ridge which encloses Coire Crubaidh. By all accounts, this was a mistake as it meant they had neither the time nor the energy to carry on to the neighbouring Graham, Beinn na Feusaige (625m). One member had to return home suffering from a virus.

Conditions on Sunday had again deteriorated a little with a slightly stronger wind and squally sow/hail showers. Breakfast in Tesco in Inverness seemed to be the main attraction, but the two Graham baggers, for whom time is becoming precious, were the only ones out on the hill. They too headed for Carn Breac, but by the shorter route following the track and stalkers path up Coire Crubaidh before heading up through deep heather and into the snow line to gain the ridge leading to the summit. The undulating ridge provided numerous false summits as they headed forever upward in the mist to finally reach the summit cairn. Once again, conditions dictated a speedy descent aided by following their footprints in the snow which facilitated an easy return to the Coire occasionally losing sight of them on the way.

Anyone interested in finding out more about the Club should have a look at our web site www.smhc.eu, or contact the Club Secretary on annebsinclair@outlook.com.