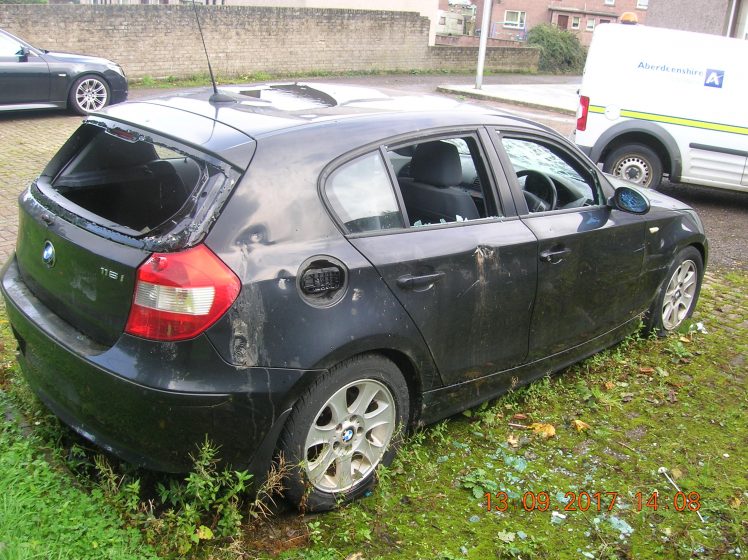 ABERDEENSHIRE Council is highlighting the cost to their services of clearing up after the guilty few who inappropriately dump waste and cars.

And communities are encouraged to be vigilant and help tackle those who think it’s acceptable to fly tip all manner of materials in their area, from asbestos, to building rubble, to sofas and fridges.

The latest figures show there were 719 instances of fly tipping across the area over the last year – nearly two a day.

The problem is principally focused in and around major towns such as Ellon, Inverurie and Stonehaven, but is also recorded in much smaller settlements.

Construction and building waste and bulky household items such as fridges, sofas and washing machines account for around a third of what is abandoned.

The majority of these items can either be recycled at a Household Waste Recycling Centre or picked up by the council’s uplift service for bulky items.

Specialist waste such as asbestos and car tyres have to be disposed of using commercially available facilities – the council does not have the ability to deal with these.

While Peterhead has the worst record, all areas of Aberdeenshire are affected, with the Kincardine and Mearns area seeing 40 instances of building or construction waste flytipping in 12 months.

Waste or materials dumped next to bins or recycling points can also be recorded as flytipping, so they don’t all fit the traditional idea of lazy dumping in the countryside. It can happen in towns too.

Abandoned vehicles are another instance of illegal dumping where public resources are needed to clear up. Over the last year, there were 523 reports of abandoned vehicles across Aberdeenshire, with almost 25% of those in the Buchan area.

Vehicles cannot be recovered by the council – car take back schemes can provide a cash incentive for scrap, as 75% of a car can be recycled – so it is in the interest of the owner to dispose of it properly.

The principle is the same – when materials are not disposed of using facilities available, it affects people’s quality of life and costs even more to tidy up and dispose of.

The council’s network of Household Waste Recycling Centres – most within easy reach of larger communities – would accept a lot of the flytipped items.

And there is even a service to uplift bulky items, with a much reduced cost for anyone receiving benefits.

“We are by no means the only area to be affected by flytipping, but it is still a problem and we have to acknowledge that as a community and deal with it,” said Chair of the council’s Infrastructure Services Committee (ISC), Cllr Peter Argyle.

“Anyone who thinks flytipping is acceptable in their, or anyone else’s community, needs to have a bit of a look at themselves and ask why they don’t use proper means to deal with their waste.

“Most right minded people wouldn’t even think about tipping a washing machine or random household rubbish at a quiet rural location, but clearly many people do, and we need to work together to stop it.”

“This is a crime which is often very difficult to detect and prosecute someone for, but besides that it still costs money to send a vehicle and people out to clear it up,” said ISC Vice Chair, Cllr John Cox.

“Communities can really assist in tackling this, in terms of being vigilant and noting down any details of related activity, the people and vehicles involved. Evidence is key.

“We will always follow this up and pursue prosecution where we have enough evidence to do so.”

More information on the Bulky Waste Uplift service, also known as a special uplift, is available on the council’s website: http://bit.ly/BulkyUplift Discounts are available for those on benefits.

Locations and opening times for the network of Household Waste Recycling Centres across the area are also available: http://bit.ly/AbshireHWRCs

If you see someone dumping waste illegally, or you come across flytipped materials, please contact Wasteline with as much detail as possible on 03456 081207.