A Business Built on Passion 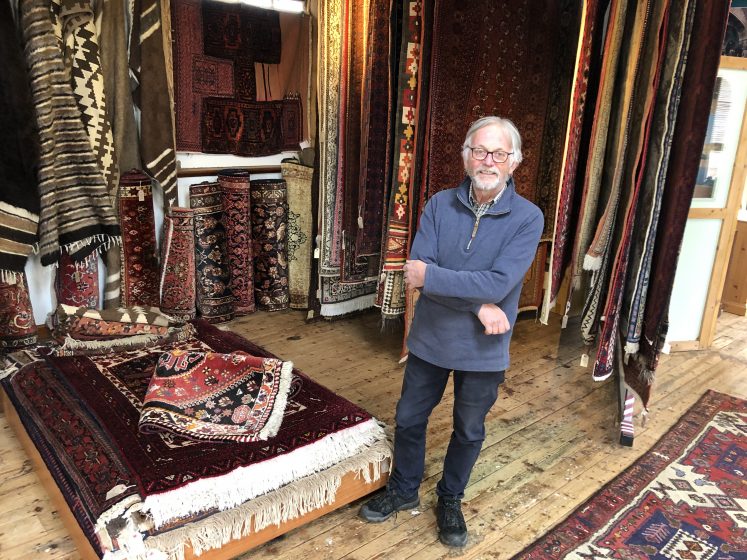 WHEN the doors close later this month as John Briggs’ Persian Rug Shop moves premises, it may feel like the end of an era – but it won’t be the end of his fascination with the rugs, carpets and culture of Iran.

When he bought the distinctive red-brick building back in 1995, John was the third joiner to set up shop there. The previous owners, the Thomson family, had owned the building for 95 years. And at first, John’s focus was indeed on his joinery.

But John developed a passion that was to see him shift the focus of his business from workshop, to the home of one of Scotland’s foremost Persian rug and carpet specialists.

John told The Bellman he had a life-long fascination with Eastern culture for which, he could perhaps thank his aunt.

“She used to play me Sheherazade, the music from 1001 Nights,” he said. “Perhaps that stimulated my interest. I have always felt very relaxed when in Turkey and Iran.”

Indeed he made his first trip to Iran back in 1974, in a trip that took him to Turkey, Afghanistan, Pakistan and India. His first rug purchase was made on the way home, as he passed through Iran and visited Tehran.

Iran was to weave its way into John’s life in other ways. For a spell, he looked after a young Iranian refugee boy, Ali, who had sent to the UK, and whom John encountered at the Milltown Community where he made toys and furniture.

Then one day, when he was making furniture in the workshop downstairs, John had a visit from two ladies. One was Iranian, and saw that he had some machine made rugs, and an interest in the culture of Iran. She told John about her brother-in-law who was an agent in Iran.

With this introduction, John started going to Iran to look at rugs.

He said, “I found I could learn about the rugs very quickly – how they are made. I would go and meet the people, visit all the different areas. I learned about the culture.

“It is not just the rugs: it is the history, geography, anthropology. All of these things. I just find it really fascinating.”

And from the earliest trips when he bought just half a dozen carpets, John returned again and again, learning more and more and buying increasing numbers of rugs to take back to his shop on Bridgefield, a building for which he also has a passion.

“It has been good to me, the shop, it suits the carpets,” he said.

His premises, 19 Bridgefield, was built as a scutching mill. There, flax was soaked then beaten to separate the fibres, which would be woven into linen. This work continued until the early 1800s, when cheap cotton from India became available and the linen industry died.

A door low down in the property shows where the flax workers could access the water – but it will soon be hidden by the wall to be built as part of the flood prevention works. And it is this project that has triggered John’s decision to move on.

“I will be sad to leave the shop,” he said, “but relieved not to see all the work going on.

“But I will not be giving up the carpets.”

John has not yet finalised his plans for his future rug showroom. Meanwhile, he can be contacted via his website where information about his new showroom will soon be published. And, after a long period of uncertainty, he can finally start planning his next trip to Iran.