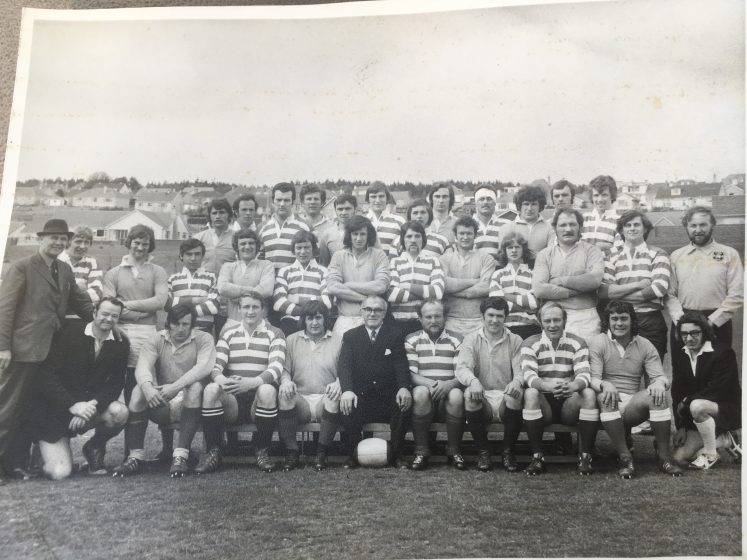 On Saturday 28th April 1973, a match was played between a Moray President’s XV and a Moray Select XV at Morriston Playing Fields, Elgin, to celebrate the 50th Anniversary of Moray Rugby Football Club.

The attached photo shows the teams before kick-off. The older reader may be able to recognise some well-known faces (and some less so!)

The opposing scrum halves were Douglas Morgan and Ian Gray.
Nearly 46 years later, the next generation of Morgan and Gray lined up at the same Morriston Ground, this time as team-mates, in the Mackie XV taking on Moray in this Caledonian League 2 match.

What follows is not an unbiased report of a neutral observer of a game of rugby! As an staunch supporter of Mackie Rugby, I want Mackie to win every game and, as a result I may sometimes see infringements which didn’t happen or vice-versa. In addition I should confess to not being an expert in the laws of the game, particularly, as a mere former scrum-half, I know nothing of the dark arts of line-out, scrum or ruck.

The first half was a low-scoring affair, with lots of effort and some good Mackie running, with either the final pass not going to hand or an intervention of the whistle.

As it happened, Moray scored the only try of the half, with only a single Mackie penalty by Ross Gray in reply, leaving the interval score at 5 – 3 to the hosts.

The 2nd half started well for Mackie when a typical jinky run from Simon Morgan led to a try under the posts which Ross Gray had no difficulty in converting.

The score was now Moray 5 – 10 Mackie, but that was as good as it got for the boys from Stonehaven and Simon in particular when he was, not only penalised for a dangerous tackle, but sin-binned as well.

My Mackie persona said it wasn’t even a penalty, let alone a yellow card, and  just to add insult to injury, was I the only one who saw a Moray forward pass in the lead up to the incident ?

Moray soon made use of their numerical advantage and brought the scores level with an unconverted try. The score was now 10 – 10 and all to play for!
Mackie held on till Simon’s return to action, only to be hit by another hammer blow when Iwan Kelly became the next Mackie player to fall foul of the referee’s wrath when he too was given a 10 minute rest. He was alleged to have been guilty of a late tackle, which may be true, but the ref’s response seemed more due to the opponents reaction rather than to the offence itself.

Mackie had now to weather another period with 14 men and with a sense of grievance. Captain for the day, Ross Gray, was also warned for questioning some of the official’s decisions, but isn’t that part of a captain’s job, as long as it’s done in a non-aggressive manner?

Moray now had most of the possession and pressed for another score and, despite some heroic Mackie defence, two further tries were scored, one of which was converted, leaving the final score Moray 22 – 10 Mackie.

This Moray team seemed transformed from the one which was soundly beaten at Redcloak during the first part of the season. Did they deserve to win? Well four tries and a try bonus point to only one try from Mackie would suggest that they did, but the over-riding feeling at the end of the game was one of frustration.

The boys knew that they didn’t perform at the top of their game for a number of reasons, only some of which were self-inflicted. Getting the referee “onside” is still a problem, particularly away from home.
They must now get over it, stop feeling hard-done by and sorry for themselves, dust themselves down and get ready for the last two games of the season, the first of which is at Redcloak next week against RAF Lossiemouth.

At least the players can get rid of their frustrations on the field. We touch-line Jonnies can only watch, encourage and support and hope for the best !!