Garioch Too Hot For Mackie 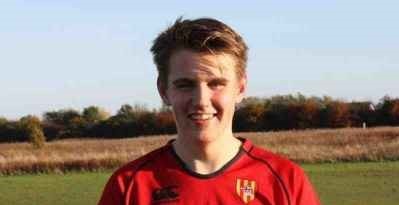 The temperature was up in the twenties at Kellands Park, Inverurie on Saturday, for this 3rd v 2nd Caledonia League 2 North clash. The winner would almost certainly be promoted to Caledonia League 1 for season 2019/20.

After an initial spell of Garioch pressure, well defended by Mackie, the first score went to the boys from Stonehaven when Iwan Kelly was, not for the first time this season, in the right place at the right time, to score in the corner. The try went unconverted making the score Garioch 0 – 5 Mackie.

For the next 20 minutes Garioch were too hot to handle for the Redcloak outfit with 4 unanswered tries, bringing the score to Garioch 26 – 5 Mackie.

As half-time approached, Mackie rose from their slumbers when a break from scrum-half Kyle Mair fed substitute Chris Kay to score in the corner.

Unfortunately Garioch managed another try of their own before the break and the whistle then went with the score Garioch 33 – 10 Mackie.

As they had in the first, Mackie scored early in the second half with Iwan Kelly again the main man. This made the score 33 – 15 and could the Mackie support dare to dream ?

Some less than accurate handling and wayward tactical kicking, not to mention high tackles put an end to any hope of a remarkable fight back.

During the game, a significant number of the Mackie side had to leave the field suffering from various knocks, some new injuries on the day, and some the after effects of a hard season.

On the day, Garioch were the stronger team, made better on-field decisions, ran with determination and defended stubbornly.
Mackie played well in patches, scoring 4 good tries and tackling with gusto, but on too many occasions they lacked composure and panicked in possession.

The League season is now over, with Mackie winning 10 games and losing 6. They scored 543 points at an average of 33.9 and conceded 423 (average 26.4). In 12 of the games they scored 4 or more tries giving them 12 try bonus points. One losing bonus point gave the team a overall points total of 53 league points. This was good enough for 3rd place in the league.

Before the season finishes, a Mackie team is heading for the French town of Acheres, Stonehaven’s twin town 23km north of Paris. A game will be played on Saturday 11th May to celebrate their 50th Anniversary.

I would like to thank everyone who has contributed to this year’s campaign. I apologise when I got things wrong and for not mentioning all the guys who worked their socks off, week in and week out, for the good of the team.

I don’t apologise for not being impartial !

Thanks for giving me somewhere to go on a Saturday afternoon !!