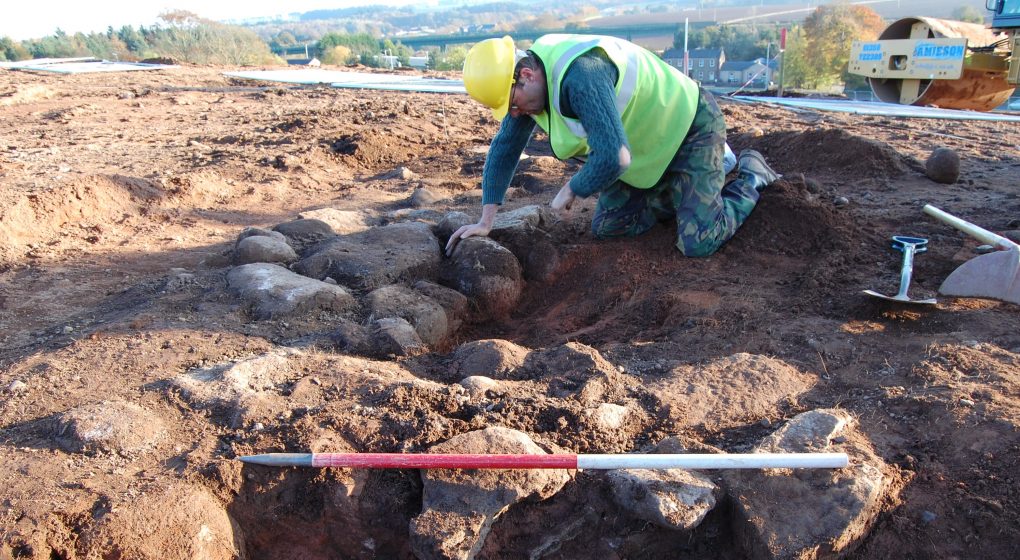 A glimpse of a piece of pottery in the fading evening light two years ago led an archeologist to a find now recognised as evidence of early Neolithic settlement at Stonehaven.

Robert Lenfert of Cameron Archaeology was working on land adjacent to Fetteresso Cemetery in advance of the housing development there. He told The Bellman it is an area of interest as it has revealed evidence of continuous occupation from across the millennia, with finds from the Neolithic, Bronze and Iron ages and the Early Medieval period.

And that evening, as darkness fell, he and his colleague Alison Cameron unearthed trays and trays of pottery pieces. In all, some 306 bowl fragments were found, having been deposited sometime between 3952 BC to 3766 BC at a time when farming was being introduced and permanent settlements established.

The bowls have a rounded bottom, a style known as carinated and one known to have already existed in France.

”This suggests that this ceramic, or the people who knew how to make it, arrived in Stonehaven Bay when this technology was very new in Scotland,” said Dr Lenfert.

The pottery pieces along with some grains and charcoal pieces were radiocarbon dated. But Dr Lenfert said he would love to have funding for more analysis to determine if the bowls were made locally or made elsewhere then imported.

He added he would also hope a reconstructed bowl could emerge from the pieces, which are now deemed treasure trove and are stored at Aberdeenshire Council’s facility at Mintlaw.

If you are interested in the Neolithic find, a more detailed account can be read here in a Heritage Daily report that itself contains further links.