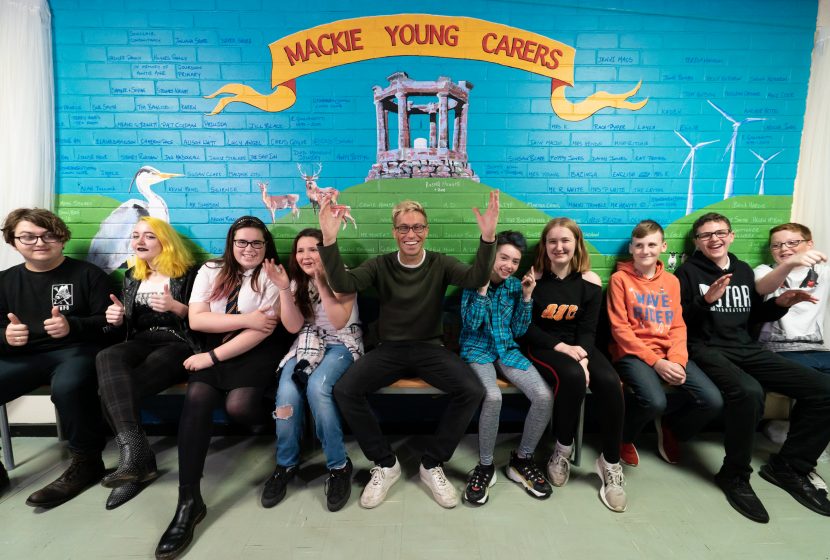 COMEDIAN Russell Howard unveiled a special fundraising wall at Mackie Academy at an event raising awareness of the role young carers play in the school community.

The Bath funny man signed one of the wall’s bricks and spoke to a selection of young carers at the celebration in the Stonehaven school on Saturday.

Russell said: “It has been a privilege unveil this very special wall highlighting the role Young Carers play. They are all unsung heroes sacrificing time and effort to care for someone important to them, whilst going to school. It has been eye-opening meeting the group of Young Carers at Mackie Academy this morning (Saturday, September 21). I hope more can be done to support Young Carers in schools up and down this country.”

The school’s young carers group has been raising funds for an outward-bound activity trip to Loch Eil in October to give the 10 members of the group a well-earned break. The group packed customers bags at a Co Op convenience store last year to raise money for the trip’s deposit. Local people and businesses have been very supportive of the fundraising effort.

The most generous donation has been from the Stonehaven and District Lions Group who donated £1000 towards the trip. The Outward-Bound Trust awarded a 50 per cent discount to the group making the excursion more affordable.

The organisers of the trip, Fiona Beeley, Principal Teacher of Pupil Support and Attainment, and Catriona Masson, Pupil Support Worker, are impressed with the enthusiasm displayed by the young carers and donors for the project. They also hope that the wall will serve to raise awareness of the young carers in the local community in a positive manner.

Young carers are defined as school pupils who support family members with mental and physical illnesses; drug and alcohol addictions, or siblings with disabilities. The support they provide can impact on their physical and mental health as well as academic attainment or attendance at school. Pupils are supported by school staff, the young carers group and bodies such as Quarriers and Community Learning and Development.

Cllr Gillian Owen, Aberdeenshire Council’s Education and Children’s Services Committee chair, said: “I am delighted to see young carers at Mackie Academy being acknowledged in this way. Young carers juggle a full-time education which often involves studying for exams with caring for friends and family members undergoing difficult circumstances. I hope they all enjoy meeting Russell and have a lovely time at Loch Eil. As a council we want to encourage young carers to feel accepted and to be able to feel confident to ask for the support they are entitled to.”

Committee vice chair, Cllr Mark Findlater, said: “We are undertaking work to raise awareness of young carers in Aberdeenshire schools. However, there are probably pupils acting as young carers that we don’t know about. I would urge them to inform a teacher about their situation as soon as possible so they can receive the support they need.”

The bricks were priced at £5 for individuals and £25 for organisations. There was no limit on the number of bricks that could be sponsored. So far more than £2,000 has been raised.

The wall was designed by artist Abigail Beeley. The opening event included a rickshaw disco and catering provided by Macphies, one of Mackie Academy’s Developing the Young Worksforce partners, as well as a selection of savoury treats courtesy of Terry Anne’s Tearoom.