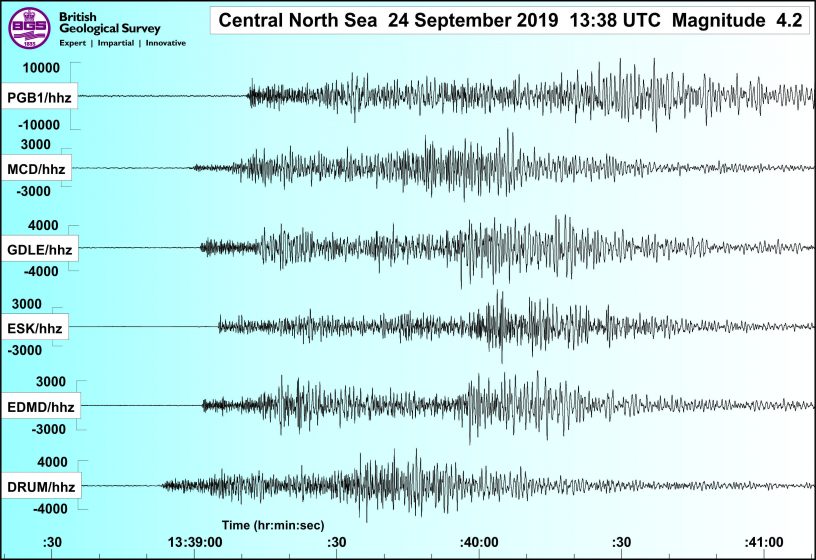 SCIENTISTS from the British Geological Survey recorded an earthquake in the Central North Sea yesterday, measuring 4.2 on the Richter Local Magnitude scale – and detected at a seismic station close to Stonehaven.

He said: ”We have received a report from the Elgin-Franklin Offshore Field that this event was felt, by several people, on the PUQ offshore oil platform.  The reports described  ‘a moderate shaking feeling’.”

You learn something every day

UTC is Coordinated Universal Time, which is the successor to Greenwich Meantime and also called ‘Zulu’ in the military.

And the intensity is a measure of the effects of an earthquake at a particular place on humans and (or) structures. The intensity at a point depends not only upon the strength of the earthquake (magnitude) but also upon the distance from the earthquake to the epicentre and the local geology at that point.

According to a synopsis of the European Macroseismic Scale (EMS 98), 3EMS is classified as weak – the vibration is weak and is felt indoors by a few people. People at rest feel a swaying or light trembling.

A wee humourous note – when working at the Mearns Leader during a slow, slow news week, I once put together a 350 word page lead story about a rainbow. Earthquake! makes for a much better headline.