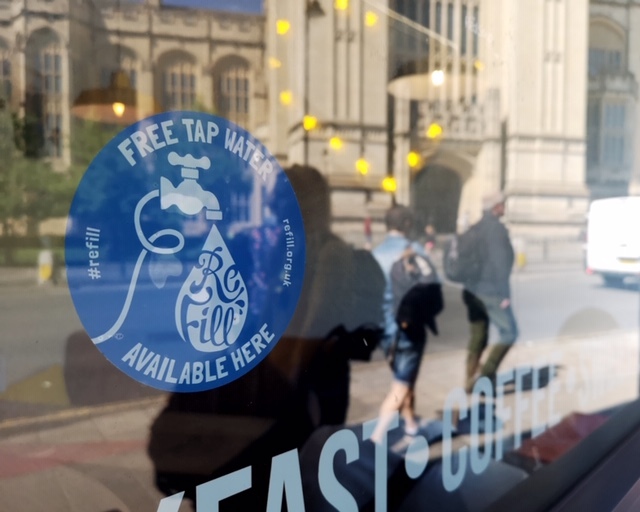 REFILL is a scheme set up by City to Sea – a non for profit campaigning organisation aiming to prevent plastic pollution at source. Businesses can get involved by downloading the app and signing up as a Refill station to advertise the fact that they are happy to refill your reusable water bottle.

Refill estimates that if all their Refill stations were just used once per day they are stopping a whopping 4 million plastic bottles at source a year!

Bottles can be filled from a tap or a water fountain. They provide lots of information on how to install water fountains if that was something the business would like to pursue.  Refill discount water fountains with their partner MIW as an incentive.

How I got into it: I started thinking about the impact of plastic bottles when I saw a post on a local Facebook group Zero to Hero about how hard it is to recycle plastic compared to metal. The advice was to choose a tinned drink instead of bottled. Following that advice the penny really dropped for me and I came across the Refill app when looking further into what I could do.

I enquired to see if there were any schemes operating in Stonehaven. There was nothing in Aberdeenshire. So I signed up and contacted a local Councillor, Sarah Dickinson, that I had been following on Facebook as I was interested to find out about all of her environmental efforts and work.

After I met with Sarah she gave me lots of great contacts and ideas how to get the campaign kicked off. As a result I introduced the topic at the Stonehaven District Community Council meeting, presented at the Stonehaven Business Association and attended the Greener Kincardine and Mearns group.

Two businesses had already signed up prior to me starting, they were The Bay and Greggs.  Since starting I’ve been in contact with the council’s Sustainability Officer to look at the possibility of water fountains and refilling in council buildings. Once confirmed I can then promote which ones are able to participate. Five businesses in Stonehaven have signed up and I’ve been promoting them on my Facebook page Refill Aberdeenshire and the twitter account @raberdeenshire

I’ve called it Aberdeenshire because once I started with Stonehaven I got inspired to take it further. So I expanded my scope as local champion from Stonehaven to Aberdeenshire. I’ve been contacting businesses, mainly on Facebook, to allow them to respond at their convenience, rather than during a busy work day.

I’ve also been navigating the corporate structure of Scotrail to find the right person to effect change so we can have some water fountains popping up at our stations.

Change will be slow but if we can all try to plant the seed with these bigger companies I’m confident that it will eventually come.