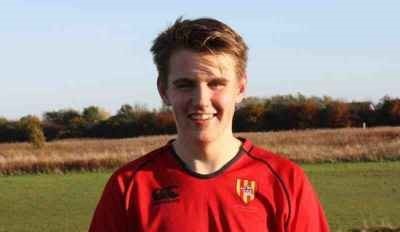 On Saturday, Mackie, without a league win so far this season, played host to unbeaten league leaders Highland 2nd’s, who made the long journey down from Inverness in confident mood.

Such is the fascination of sport, the form book was thrown out of the window and the visitors headed home with their tails between their legs. This was no fluke result. The Stoney team were heroes to a man and thoroughly deserved this convincing victory, collecting a try-scoring bonus along the way.

Six tries were scored and 6 conversions were kicked (5 from Kyle Mair and 1 from Mikey Kelly).

The first try came after 5 minutes, when after a commanding Mackie scrum, a pick up and run from Iwan Kelly led to a score under the posts. Soon after, good hands from Chris Ballantyne and Iwan Kelly gave Ross Hartley the chance to cross the whitewash.

Highland tried hard to stop the rot and a lengthy spell of pressure ended with a dropped pass. Then to make matters worse for Highland, Ross Hartley made it a pair,  bringing the score to a remarkable 21 – 0.

On the half hour mark, the Highlanders at last found a way through the impressive Mackie defence, but were unable to add the extras. However, it was Mackie who had the last word of the half when Stuart Hamilton finished a move started by Lyle Venters.

The score at the break was 28 – 5, but with memories of last week still fresh in the memory, no-one was taking anything for granted.

Highland now had the breeze in their favour and started the second period on the front foot. Mackie held out for close to 15 minutes, repelling a series of attacks before the inevitable try was scored, though again the conversion was unsuccessful.

This score brought out an almost immediate reaction from Mackie, when Dean Gerrard, who had been having a storming game, crossed to bring the score up to 35 – 10.

Iwan Kelly then doubled his try-scoring total when he was on hand to finish off another burst from Lyle Venters.

Mackie had beaten the champions, had denied them any bonus points and the coupon- busting result was Mackie 42 – 17 Highland 2nd’s.

In Highland’s previous three league games this season, they had conceded a TOTAL of 48 points and were averaging nearly 40 points scored per game. For Mackie to score 42 points against them and to only concede 17 was a shock, but extremely encouraging for the rest of Mackie’s season.

Mackie had no failures and can now look forward to the rest of the season with confidence.