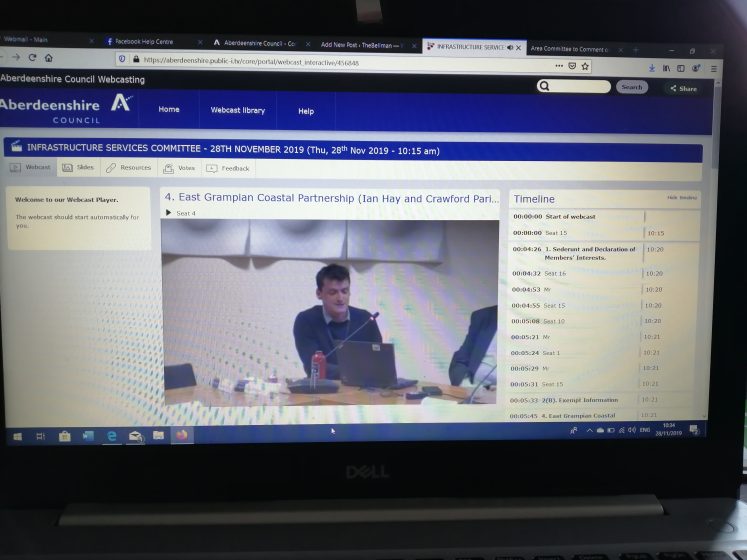 TODAY’S meeting of the Infrastructure Services Committee is about to start – 10.15am.

Councillors from across the Shire will consider the proposals for flood defences along with schemes in Ellon, Inververurie and Port Elphinstone, and Insch – and Stonehaven

At last week’s meeting of the Kincardine and Mearns Area Committee, councillors voted in favour of the proposals for Stonehaven:

However, they agreed a comment reading: ”The Kincardine and Mearns Area Committee support taking action to address the flood risk in Stonehaven to achieve a 1/200-year flood protection level.

”This action recognises the potential need for an increase in sea wall height as a result of projected sea level increases.

”However, the committee asks that all defences at sea are maximised in order to ensure that the sea wall height is optimised at the lowest achievable level such that the promenade need not be raised.”

A representative of Stonehaven Flood Action Group is to address the IS Committee.

If the Infrastructure Services Committee agree the proposals, the scheme will be referred to SEPA, who are prioritising Scotland’s flood defence spending in what is described as a highly competitive process. SEPA will then make recommendations to the Scottish Governement.

Back in 2016 Council leaders and Scottish Government ministers committed £420 million of funding over the next 10 years to flood protection schemes. It is money in this fund Aberdeenshire Council are hoping to tap in to.