Burns in a Bunkhouse 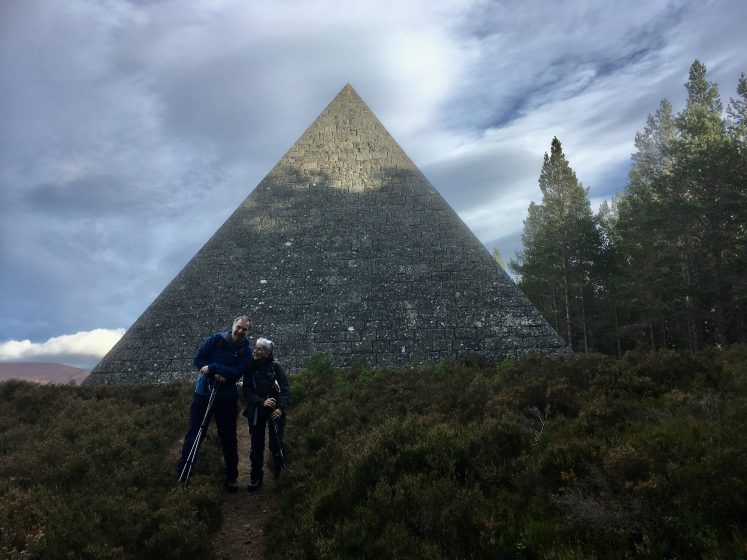 A large contingent met in Braemar at nine am before heading out to Allanaquoich. They crossed the new bridge over the Water of Quoich, which replaced the previous bridge destroyed by Storm Frank in 2015.

Once across they headed up the track to the coll between Carn Elrig Mor and Carn na Criche (737m) where a high stone wall which provided shelter from the wind was appreciated.  Here, a feather from an eagle was found, the quill of which was wider than a biro.

From there, the group headed on to the Corbett, Carn na Drochaide (818m). Another comfort stop was taken here before a decision was made to extend the day and wander down across to Creag a’ Chlieirich, Crag of the Cleric, (650m). It is not clear if a priest ever preached here, but there is a nice cleft which would have served the purpose well.

From the top they wandered down and came across what they felt could only be the remains of an illicit still next to the burn which took them back to the track and car park. It had been a fabulous day out with the sun shining despite the higher tops being in the mist.

A less adventurous trio made a much later start from Easter Balmoral, 11.45am to be precise. This group headed up over the hill boasting the fabulous pyramid cairn constructed to commemerate the death of Prince Albert.

The inscription reads “To the beloved memory of Albert the great and good Prince Consort. Erected by his broken hearted widow Victoria R. 21st August 1862.”

From there they headed up the track high on eastern shoulder of Glen Gelder as far as Gelder Shiel. The cottage itself is closed to the public but the former outbuildings now comprise a Mountain Bothies Association bothy. This is in fine condition, wonderfully timber lined and containing a wood burning stove and several bunks. There is also a composting toilet at the rear.

Leaving the bothy they were surprised by the strength of the wind before returning down the track towards Balmoral. Finally they cut down a rough track towards the path leading to Princess Alice’s Cairn. A number of cairns exist in this area commemerating the marriages of Queen Victoria’s children, and one built in 1852 to commerate the purchase of the estate in 1848 . Some but not all of these were visited on the return to the car.

The Burns Supper that followed was well up to standard with all speakers, Alan Munro, Chris Jones, Paul Yarnold, Karen Yarnold and Linda Lawson excelling and the usual fair well cooked by the usual volunteers. Additional contribiutions were made by various members, including a reading of Tam O’ Shanter. Some members revelled well into the night in true Burns fashion.