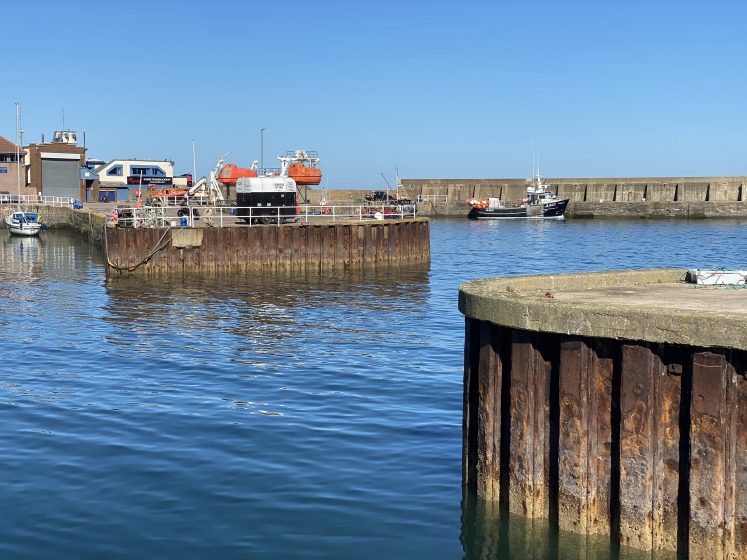 THE works needed to upgrade the steel sheet piles at Stonehaven harbour have been granted listed building consent.

The piles encasing the end sections of the Net Pier, Fish Jetty and South Pier were put in place approximately 60 to 70 years ago, to protect the stonework of the jetties.

If you are interested in the harbour, then the planning permission documents hold a wealth of information – the handling report gives the historical backdrop and describes the works to be undertaken. Meanwhile the sheet pile inspection report shows the amount of work and investigation required for such projects.

The building of the harbour was no different.

The following extract is from The First [and Second] Report[s] of the Commissioners – Great Britain. Tidal harbours commission of 1847, which is available on Google as an ebook. It summarises the efforts and costs involved.

‘‘The harbour of Stonehaven was formerly under the sole management of the magistrates and feuars of the town, by whom a grant of it was obtained from the Earl of Marischall in the beginning of the seventeenth century.

”Although enjoying peculiar natural advantages, this harbour had been very little improved by art; and, consequently, while from its favourable locality it was accessible as a place of refuge to coasting vessels in easterly gales, when no other harbour between the Frith of Forth and the Murray Frith could with safety be approached, its internal accommodation was so insufficient as greatly to deter vessels from frequenting it on ordinary occasions.

”In the year 1812 Mr. Robert Stevenson, C. E., was employed to make a survey, with a view to such improvements as might render the internal accommodation commensurate with the natural superiority of the harbour; and he then furnished a Report and relative Plan, to a copy of which, herewith submitted, the Commission is respectfully referred.

”Unfortunately, the funds requisite for accomplishing this plan were not attainable.

”The harbour therefore remained in its originally imperfect state until the year 1825, when a modified plan for its improvement having been furnished by Mr. Stevenson, and the requisite funds having been provided, an Act of Parliament was obtained, vesting the harbour in certain Commissioners and Trustees, and authorising the execution of that plan.

”Copies of the Act and relative Plan are herewith laid before the Commission.

”With the exception of a proposed extension of the old, and formerly the only pier, on the north side of the harbour, the works thus projected by Mr. Stevenson, and sanctioned by Parliament, were executed, and, in addition to them, there has been erected about 1000 feet in length of sea-wall along the west side.

”Subsequently, two jetties were built; the one running westward and inward from the outer end of the south pier, and the other extending towards it from the land; leaving between them an opening of 50 feet. By these jetties an inner harbour with still water has been formed, in which vessels lie moored, and load and discharge in security. The other division, or outer harbour, also accommodates vessels when occasion serves. The area of both is about 5 acres.

”With the sanction of the Board of Northern Lights, leading lights have been provided. They are found of great benefit to vessels taking the harbour, and even useful to vessels passing north to Aberdeen, which, by keeping the lights in a certain bearing, are enabled to direct their course with precision, without the risk of running too near the land, or, for avoiding that risk, taking too great an offing.

”By all these improvements, this harbour, at a cost of upwards of 9000l., has been rendered commodious for the trade of the place, and instead of being as formerly, from its internal insufficiency, rather shunned, unless on occasions of imminent emergency, it now proves an acceptable refuge to wind-bound vessels at all times, and its easy approach has been the means of saving many vessels from destruction. ”