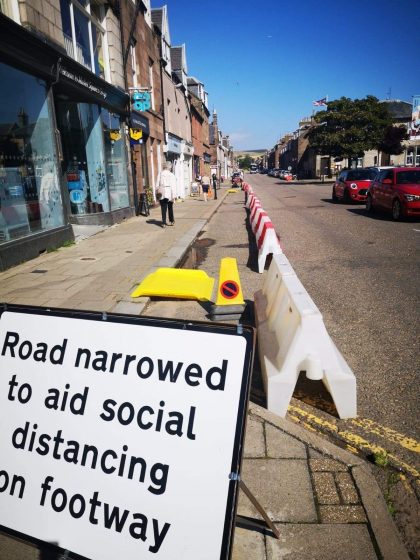 A STONEHAVEN woman’s petition has resulted in the cones and barriers in our town coming under scrutiny and our councillors instructing officers to prepare a report on the Spaces for People measures.

More than 800 locals put their name to Carol Humphrey’s plea made on Change.org: ”We need to save Stonehaven we have already got shops closing and lots of businesses around the town are finding it so hard to make a living.

”We need to get Aberdeen Council to remove the cones not saying all of them but they need to move most of them they are not working for Stonehaven Please sign.”

With the chair of the Kincardine and Mearns Area Committee, Cllr Wendy Agnew, determining the petition was competent and relevant, the matter was brought before the members at their Skype meeting yesterday.

There is, unfortunately, a delay in releasing the recording of the debate. However, Mrs Agnew said a lively discussion was held.

She said: ”Some councillors were happy to keep the barriers and others thought they should be greatly reduced.

”I asked about the spaces required for restaurants and pubs and was told it was one metre. I then asked why the barriers were put up to distance people with two metres when they were out in the open air and safer than inside buildings.

”The reply I received was rather woolly. I did make the point that perhaps certain small areas outside shops which have queues could be kept but the majority of barriers and cones should be removed as per the request of the petitioners.”

And Mrs Agnew has provided The Bellman with the questions/concerns the councillors would like addressed in the report to be prepared by the council officers who implemented the measures.

The evidence to support the need for social distancing measures and its continuation to support public health,
Why cones and barriers have been chosen in the first place, as opposed to other alternatives?
Explanation to the decision making process for the introduction of these measures,
What monitoring regime is in place to measure the ongoing need for barriers and cones, traffic counts, footfall numbers etc?
The governance arrangements for the implementation of the social distancing measures,
Whilst the petition addresses the removal of all cones, in particular look to establish if cones can be removed on Allardice Street,
Discuss the situation with the new parking provision at Baird Park and our current lease arrangements,
How will the darker nights affect the safety issues associated with the barriers and cones?
Highlight the areas that are working well and have a need for barriers,
Address the issues surrounding the complete removal of all cones and barriers, and
To comment and include within the report that Stonehaven town centre is very much open for business.

The area committe’s next scheduled meeting is on Tuesday October 27.

The installation of the barriers, a kneejerk reaction as far as I’m concerned, has negatively impacted the centre of the town. It has also cut the parking spaces for the people who man the businesses around the square as well as severely limiting the parking for what visitors we have had during the last couple of months, as well as for those locals who perhaps are not as fit as others. Have you seen the starmash with deliveries?? I’ve visited other locations of similar size (ie Ullapool, Rosemarkie, Forres etc in the past 10-14 days) and they have survived very well without barriers and allowing people to use their common sense. They have also been busy. All we need is yet another report telling us what we already suspect…………

I don’t believe that the barriers around the market square are causing the problem that shops are experiencing just now. I tend to believe responsible people choose not to browse in shops as they may have done previously because of covid and not because of the barriers hence the drop in footfall. From my own personal experience I used to enjoy parking up and having a wander around all the shops and always found something to buy whether it was from a regular shop or charity shop but not any more. I now only shop in the ones I need to. I appreciate that we have to support local shops and businesses in order to keep them and have also used the online services of those who provide it but keeping safe and valuing the health of others is of greater importance. If people still need to shop in Stonehaven they will find a way and a free space outwith the barrier areas and WALK to the shops you don’t need to park right outside a shop.
It does not help that the flood prevention scheme has blocked off streets that would have made parking more accessible.