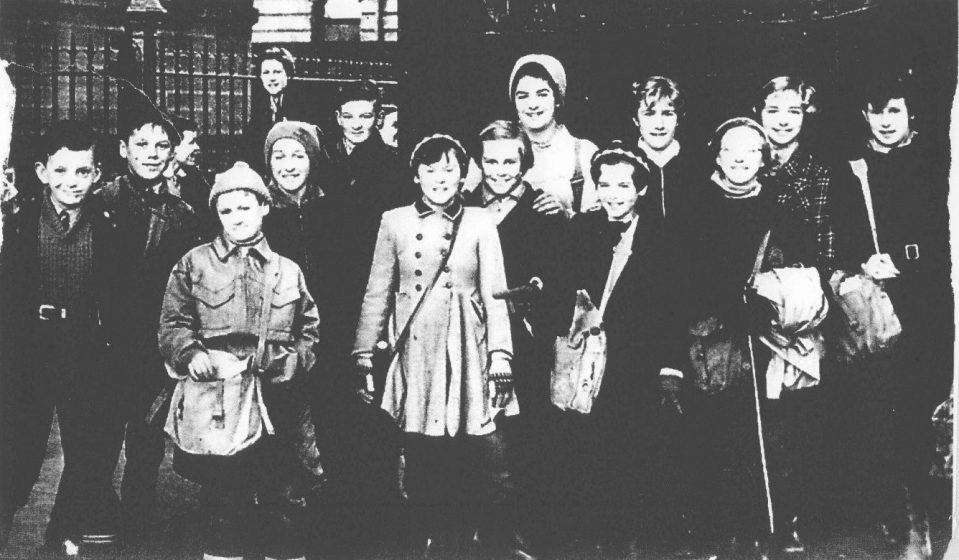 By Callum Fraser – pictured on the left wearing a tie

After reading a recent newspaper article where a blue-chip company chief executive was complaining that pupils were now leaving school unprepared for the world of work, I cast my mind back to my very early experiences of work beginning more than fifty years ago as a schoolboy and student in Stonehaven.

Nowadays, of course, there are a wide range of restrictions which limit school children’s employment opportunities, which would mean that in terms of age and type of work, myself and many others at that time would have been breaking the law if today’s regulations were applied.

A typical example of this, and actually encouraged by the authorities at the time, was the mid-October “tattie picking” season. In fact we were given 3 weeks holiday from school so that we could actively engage in this task. I remember in my primary school days, from the age of around 10, being picked up with a motley crew of other school children, fathers, mothers and even grandmothers, outside Dunnottar school in a cattle float lorry with rudimentary seating made up of straw bales, at what seemed to be the extremely early time of 6:30am, to be transported for a days tattie picking in the fields at Castleton Farm near Fordoun.

The system, which had been employed for many years, allocated a “bit”, or half a bit in my case initially, to each picker, whose task it was to pick all the freshly dug tatties in each row or drill before the machine returned in what seemed a never ending cycle to expose yet another batch of potatoes to fill the baskets once again.

I can almost smell the freshness of the earth even now. With the continuous bending, the work placed heavy demands on the back, but at our age we hardly noticed it, but the more mature members of the squad seemed to be suffering at times.

The allocation of each bit’s length could seem somewhat arbitrary, as it depended on the shape of the field and the size of the squad. If someone decided to have a day off, then each bit was longer, but the pay was still the same flat rate. From memory, 25 shillings a day for a whole bit was the peak rate that I earned, so what seemed to be a fortune at that time could be earned over the 3 week period.

The fact that not all fields were perfectly rectangular could be an advantage in some cases especially if your bit was on the end of the row, but the Grieve, or farm manager, in charge, made frequent adjustments to compensate, moving the markers when necessary. He also was the person who inspected each bit to make sure that no one was leaving any tatties unpicked, either inadvertently or deliberately. I can’t recollect who actually organized the squads but Castleton always took priority, until their entire crop was lifted, and then we had the opportunity to go to other farms, sometimes for maybe just a day or so. A bit of variety was welcomed, and we went to various farms around Barras, Glasslaw and Upper Toux in the final days of the 3-week break. Maybe my memory plays tricks but there seemed to be very few wet days during those weeks, just as well, as the fields could get very muddy, conditions far from ideal for picking tatties.

I am not sure when this informal organisation of labour actually stopped, but I think the 3 weeks were curtailed to one in the 60s, perhaps due to the advent of greater mechanisation, or maybe employment regulations, so my generation were the last to take part in what had been a major seasonal ritual for many decades. Such is the march of progress I suppose.

Callum gets on his bike

A year or so later, a new opportunity opened up and I “inherited” the delivery round for Jimmy Robertson, the grocer, in the Old Town, a few doors away from where we lived, after the previous lad left Mackie and moved on to college.

At that time all the grocers in the town employed at least one lad on a bike with a basket, who delivered grocery orders to customers throughout Stonehaven. This was normally after school each afternoon, except Wednesday half day, and either all day on Saturday, or as and when required. In my case, Jimmy didn’t have too many scattered customers so my working pattern was quite flexible as long as the regular customer orders were fulfilled. Some of my counterparts working for larger grocers such as Knowles in the Square were kept going continuously for most of the day on a Saturday. Nevertheless, I did have my quota of journeys from the Old Town to Brickfield, Fetteresso Terrace and other areas where the hills seemed quite steep with a full load of groceries in the basket. I also had to collect orders from some customers, which meant a double journey was necessary.

The tips were always welcome though and the small sums quickly mounted up. Wages for the week were 17/6, with a bag of Chocolate Toffees on a Saturday. I can almost taste and see those toffees now, with their blue and black wrapping paper. I think I worked for Jimmy for nearly five years so I had a lot of toffees in that time. I can’t recollect a pay rise in that time so inflation must have been low during those years.

Jimmy was very keen on Opera and went to the concerts in Aberdeen Music Hall, on Union Street, at least once a month. It was easy to tell when a concert was imminent or had just been attended, as he would burst into a rendition of song at random intervals, when carefully measuring out flour, sugar, tea, or whatever. I tactfully refrained from any comments.

Jimmy was one the last of his type, having inherited the business from his father, operating it until his retirement, when he could then indulge in his favourite pastimes of bowls and music.

When I was back in Stonehaven a number of years ago, I met Donald Mitchell, now retied from his Haircare business in Barclay Street, and we shared some memories of those days, as he worked for Knowles at the same time. He reminded me of the co-operation between the grocers when a customer order couldn’t be fulfilled with a specific item, and the delivery boy would be sent off to another grocer to “borrow” the item. I just hope they managed to keep track of it all, as it seemed to be based on trust and the item would be replenished when new stock arrived. We both agreed that the bikes were not particularly well equipped with brakes, but we survived without any injury.

Other lads of our era had jobs with one of the milk delivery rounds, either Farrochie’s or Balgowan’s, covering most of the town before they went to school – I wonder if they still get up so early in the mornings as they did then. Newsagents were another big employer with their young work force performing regular delivery rounds before and after school.

I worked for Jimmy until I left Mackie in 1965, and then had the summer to fill before I went to University …

Read about Callum’s foray into the fish houses – and more – next week in part 2 of his account.

Yes, I remember a few faces as well. Saw you on the right. Picking tatties was quite relentless, pick them all up ready for the basket collection and then start again on the next lot. But as you say, the money was the best thing about it.

Loved the photograph Callum – and can still put a name to about six faces. I was one of the tattle pickers at Castleton and still have a watch I bought with my first week’s wages for half a bit. I well remember the hay bales and also the mud – and the sore backs.
Happy days though!!

Dear Madge,
C&A and cheesecloth blouses,itchy and a bit see through! great story.

Well written Calum and such a lovely trip down memory lane. Tattie picking was hard work but we had great fun spending our wages in C & A on fashion clothes. Great memories