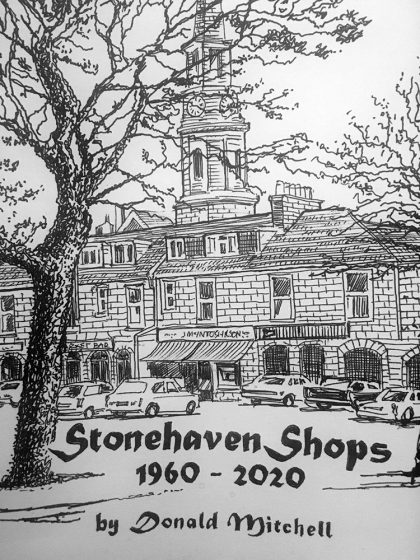 A new book, published in time for Christmas, will bring back memories for generations of Stonehaven folk, telling the story of the many shops and businesses in the Town over the past 60 years. It has been written by Donald Mitchell, who is well known for running a very successful hairdressing salon ‘Hair Care’ in the centre of the Town for over 40 years. Donald moved to Stonehaven from Turriff at the age of 11 when his parents George and Ella Mitchell took over the Star Inn in Rodney Street, at that time one of the busiest pubs in the Town. The book takes you on a tour around Stonehaven, describing the shops that were there in 1960 and the many changes over the years. He tells us about the shops and the many characters to be found. Maggie Arthur had sweetie shop at Bridge of Cowie, very popular with kids at Fetteresso School just up the hill and which is today the Community Centre. Maggie never bothered with the weights on the scales, an extra handful was just fine! Or Bunty Donald who ran Yule’s Toy and Gift Shop on Allardice Street, where Donald spent his pocket money on Airfix model kits and Corgi Toys. And Jock Marshall whose bike shop in the High Street of the Old Town kept your bike on the road with many Stonehaven boys and girls getting a ’new’ Marshall’s bike for their Christmas or birthday.

The book is well illustrated with old and new photographs, and adverts from the past, and brings you up to date with descriptions of the present shops in Stonehaven today. Donald describes Stonehaven in 1960 as a prosperous self-contained town with a population of 4,500, busy with all the traffic to and from Aberdeen, thundering through the Town, day and night, before the by-pass was built. It was well served with shops of all kinds and very busy in the summer with holiday visitors, particularly from Glasgow and the west. Donald also tells us of the many hotels and public houses at that time. The Town has grown over the years, with the population now around 12,000 but still remains a popular place to stay with the the Beach and Harbour busier than ever with day trippers, particularly since the AWPR opened.

Stonehaven Shops is published by Stonehaven Tolbooth Association who run the Tolbooth Museum and is available price £4 from the Museum (open weekends 12.30 to 3.30), Giulianotti’s on Evan Street, Ritchie Leasing at 3 Market Square, Aly Bali on Evan Street, Arduthie House on Ann St and Cut ‘ n’ Go hairdressers on Allardice Street and other outlets. It can also be ordered by leaving message with name and address on the Tolbooth website and paying on the donation page £4 plus postage of £1.40.