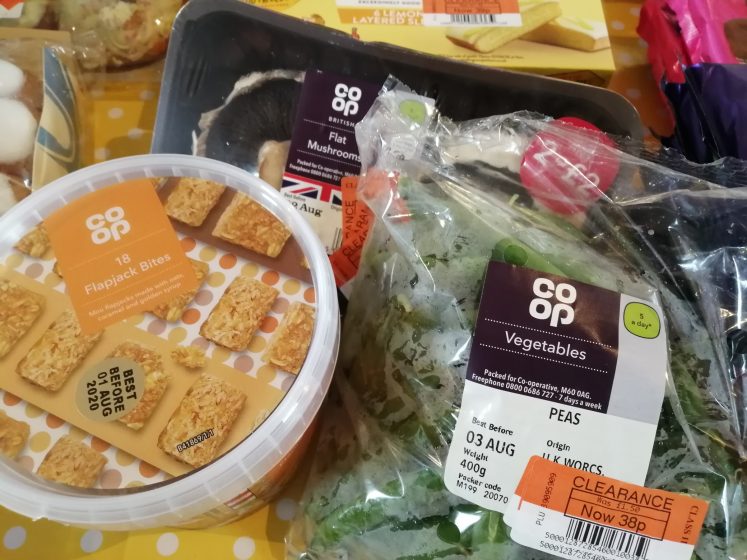 WITH an increasing number of Stonehaven residents using the services of our food banks and the Haven Larder, our community council is to write to our local authority and Scottish Government representatives to ask what is being done to alleviate food poverty.

Meanwhile, the woman behind The Haven says we need to act now to help those in need.

At last night’s Skype meeting of Stonehaven and District Community Council, SDCC, Paddy Coffield presented a report on the activities and funding sources of Stonehaven’s two food banks and our community larder.

Our Far and Wide and Catalyst Vineyard foodbanks, are both church-based organisations. Between them they provide up to 80 food/toiletry parcels each week – and report significant recent increases in the number of households requiring assistance.

Both food banks receive minimal funding but rely greatly on volunteers and donations from their congregations and the public.

The Haven’s Larder, said Mr Coffield, operates to a different model, being a not for profit social enterprise. Working in partnership with the Co-op food share programme, the Haven Larder is open to everyone. It had 610 visitors in December.

The Haven recently raised over £31,000 through crowdfunding to pay for its operating costs. It also appeals for ‘wish list’ items through its Facebook page.

Is this level of support sustainable?

Having hear the detailed report, it was the scale of community support required by all the organisations that proved a matter of concern to one member of SDCC.

Jim Stephen said: ”I don’t think our community can sustain this. Surely this needs to go to the government for funding?

”The Haven have done a fantastic fund-raising campaign – how long is that for? Far and Wide – the shop is closed. How long have they got left?”

Mr Stephen also worried about the impact on other charitable groups and good causes.

”There is only so much money the community can put on the table,” he said. ”If it all goes on food banks, then there is something wrong and the government should take over.”

Mr Stephen said he wanted SDCC to write to our MSPs and councillors about this matter.

Julie Morton of The Haven said she had spent a lot of time looking at best practice in other communities. Banchory, she said, has a similar demographic to Stonehaven and a great model in its venture Number One.

According to its Facebook page, Number One’s role is: ”Making meals from supermarket surplus to feed local people and providing a pantry for all.”

Ms Morton said: ”It is a joint initiative between the community council and Aberdeenshire Council.

”There are four stakeholders in there all supporting each other. It is very efficient and effective.”

And Ms Morton said the need for food support in Stonehaven could not wait for government action.

”The need is too immediate to wait for action at that level. We need to look at how we meet this need immediately.”

Letters to be sent

Mr Coffield said a letter to the Scottish Government and Aberdeenshire Council should seek information about their proposals to support the food organisations.

Councillor Dennis Robertson said he felt if SDCC were to write to the authorities, then they should be asking what is currently being provided and do they feel the situation is sustainable.

He added: ”We have a fantastic community and they have been incredibly supportive. I believe the community do rise to the occasion”

The shop is open Monday to Saturday from 10 am to 4 pm. At present they are using also the old Dunnottar Wine and Spirits shop which they are renting until the end of January 2021.

Parcels are distributed to 32 families each week (has been as high as 40) on Mondays and Tuesdays. Occasionally one-off parcels are provided also.

The majority of referrals are from Aberdeenshire Social Work dept.

There has been a very big increase in demand since March 2020 which is probably due to job seekers unable to find work during the pandemic health crisis.

The estimated value of each parcel is £25 – £30. They include some toiletries as well as food.

They maintain a profile for the regular clients to take account of some specific requirements such as food allergies.

They require to buy bread and milk and also some other products to replenish their stock each week. They spend a bit more than £100 per week at Farmfoods.

There are 2 volunteers on Monday and 3 on Tuesday working on food bank duties. Each spends around 1 or 2 hours per week on Food Bank related work. They have 3 drivers at present. During the previous lockdown from March onwards they had 6 drivers.

They accept food donations from any members of the public on Fridays, 10:30 until 12 noon at the shop. Food donations are left for 72 hours as a precaution during the pandemic. They also receive some money donations.

In the past they have received from other locations also e.g. St James.

All items are deposited in the store .

They have received help to collect donations including money from The Lions, Rotary Club, local allotments, Catterline School and Dunnottar School, as well as many individuals.

They have received support from

They received a considerable donation (£2,100) through Kincardine Development Partnership following a recent application.

They are based in Catalyst Vineyard Church, Aberdeen. They also have premises in Inverurie, Laurencekirk and Ellon.

They were located at the Scout Hall in Mill of Forrest Road from March until September 2020, and previously they had been based in the Mackie Academy on Sunday mornings. Now they are working out of the car park at the Community Centre in Robert Street. Longer term they will need to move out of the Community Centre.

This is a delivery only service, although they could envisage providing a collection service in future.

Typically clients contact them directly; there are some referrals also from Citizens Advice or concerned neighbours. They have between 40 and 50 Stonehaven residents on their distribution list although they don’t all get parcels every week. This compare with between 10 and 15 in previous years. They distributed around 6 times as much food parcels between March and June 2020 compare to the previous few years. They distribute around 30 parcels per week in the Stonehaven, Newtonhill and Portlethen areas. There is quite a high proportion of returning clients and it’s also not unusual for some clients to stop receiving food parcels for a period of time only to return again. They reckon they could double the present level of provision.

Most food distributed is non-perishable and comes from donations. Some other items such as toothpaste and toilet roll are also included.

They don’t incur much expense e.g. they have use of the Community Centre rent-free.

They take donations on Monday between 2 pm and 4 pm and Thursdays between 6 pm and 8 pm.

They do receive some cash donations also mainly through fundraising initiatives.

They publicise the service by issuing flyers, for example they distributed around 2000 leaflets in the Brickfield are in June.

They get great support from the Lions and the Round Table as well as the Rotary Club who do a delivery run each Monday.

The Larder was launched after the shutdown in March 2020 when an opportunity arose to re-use the premises and staff who had been working in The Haven yoga studio. They have since moved premises and are now based in Stonehaven Community Centre.

They operate as a social enterprise (not for profit company limited by guarantee) with a mix of paid employees and volunteers.

The Haven Community Larder is not a food bank. In order to reduce food poverty stigma and to reduce food waste they adopted the principle of a “swap shop” whereby people leave what they don’t need and take away something they can use instead. They reckon around 1/3 of clients are donating mainly and 2/3 are mainly collecting.

They do some delivery but mostly they operate as a community larder to reduce food waste, working in partnership with the three local Coops. They stock personal hygiene and household cleaning products as well as food. As well as food donations they buy in some dairy products.

They operate a staggered system of opening hours to provide maximum opportunity for anyone to call in regardless of working hours:

They intend to open on Wednesdays also once they have asked the local community what hours would be most convenient.

Their customers come from a wide demographic from young families to the elderly.

They do not issue standard food parcels; customers can select what they require from all the produce available. During December there were 610 visits, and they delivered 44 parcels, supported by 52 volunteers.

Those working in The Larder are generally part-time paid employees rather than volunteers. There are currently 52 active volunteers. 25 work weekly in the larder, each shift consisting of one shift leader and two volunteers. In addition there are some volunteers in particular specialisms such as Environment Health. There are 8 board members / advisors.

They work in partnership with the Coop FoodShare program and collect daily (apart from Wednesday) from David St, Market Square and Kirkton Coops.

They have a working partnership with CFINE (Community Food Initiatives North East) through their period poverty project with the Scottish Government and they also received 2 tonnes of food through the FairShare program. However this funding has now run out.

Their operational costs include rent, utilities, staff, training, insurance, stationary, equipment and posters. They have calculated that, as an organisation, each visit to the The Haven Community Larder costs £7. On average they see 600 visits per month.

They have received funding from a wide range of sources including KDP (Kincardine Development Partnership), and Aberdeenshire Council. No information available about the value of donations received from those sources. They raised a further £31,000 in November 2020 through crowdfunding.

Future is somewhat uncertain: as Julia has put it “we are working in a fluid, dynamic situation trying to respond to community needs as best we can”.

I just wonder if it would be better and more cost effective if all the different providers worked together to ensure that the need was met by both delivery and via the Haven rather than separate entities!