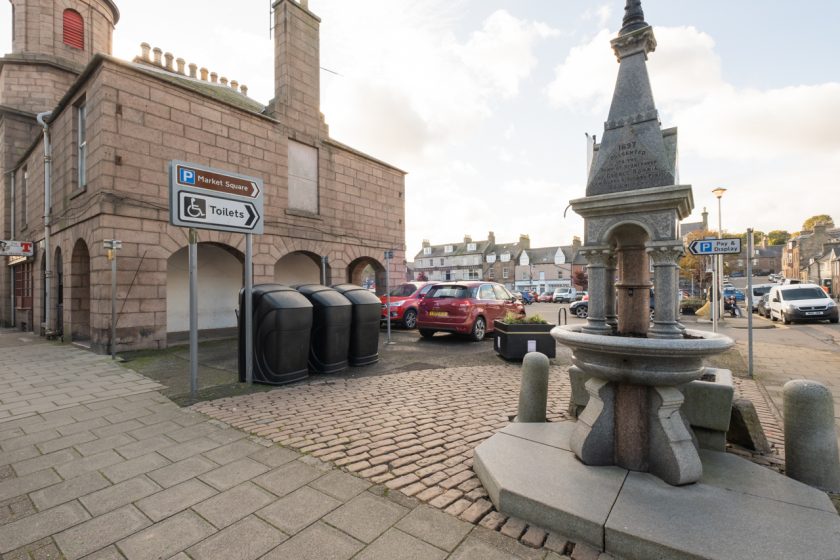 PROPOSALS for a community garden at Stonehaven’s Market Square were approved by councillors yesterday – but only by the slimmest of margins.

Stonehaven Business Association were seeking full planning permission for a project that has secured £10,000 from the Aberdeenshire Council Phoenix Fund and £48,700 from the Scottish Government Town Centres Fund.

Planners recommended the Kincardine and Mearns Area Committee give permission to designs they described as a ‘high quality regeneration’ of an under-utilised area.

The councillors were clearly not willing to merely rubber-stamp the proposals. They proceded to question much of the detail and seek reassurance on various aspects of the scheme.

Cllr Sarah Dickinson flagged the accessibilty of the area for wheelchair and buggy users. And she questioned the durability of the timber posts – and their visual impact and screening effect.

Cllr Alison Evison echoed accessibility concerns and voiced fears for the ‘creation of a space that people could loiter behind’. And she asked what provision was made for a sensory aspect to the area to give enjoyment to all. And on a different tack, she also had concerns for the maintenance of timber that had to cope with Scottish weather.

Cllr George Carr highlighted the loss of the cycle parking stands and the two disabled spaces. While Cllr Wendy Agnew raised the issue of public consultation – a pop-up exhibition planned for January was cancelled due to Covid.

And even the great British weather was brought into the deliberations when Cllr Colin Pike started to lay down his reasons for refusing permission for a garden close to the listed fountain dating to 1897 – but with seating looking away from it.

He said: ”We are looking at doing a garden installation at the north side. It doesn’t matter what the weather is, that location is always going to be in shade. And as we have inclement weather for approx 9 months of the year, so this garden as such will never thrive.”

Reassurance on most fronts

Senior planning officer Gregor Spence fielded the councillors’ queries . He said the South Aberdeenshire Access panel had been consulted and had made comments and suggestions on the proposals.

High quality materials would be required by condition, he said. A sensory element would be provided as some of the timber posts would have carvings – and all the posts would be installed using steel footings that allow easy replacement.

Cllr Dennis Robertson said he felt it was enough to make the Business Assocition aware of various points, such as scented planting. And he reassured members of the public concerned about disabled parking provision, that the roads department was looking to relocate the two bays.

And Mr Robertson said he wished to approve the application permission.

”I think it is someting that can evolve in time,” he said. ”Something that would be a really good asset for the town centre. We are never going to have a perfect location, but it will enhance what we have.”

One Stonehaven councillor left before a close vote

When it came to the vote, five councillors voted for the motion to refuse permission: Cllrs Bews, Carr, Hutchison, Pike and Wilson.

And six voted for the amendment – to grant permission: Provost Howatson and Cllrs Agnew, Dickinson, Evison, Mollison and Robertson.

Cllr Sandy Wallace had to leave during the meeting which started some two hours earlier, so was absent from the vote and took no part in the discussion.

The full committee report and a link to a recording of the meeting are both available online. The discussions on the community garden start at 01:17:00

I’m glad you listened to the area committee on Youtube as a report can only be selected highlights of what are sometimes long discussions.

Addictive viewing. Great that it got before planning committee. incisive questioning. Wonderful idea not quite right location, seemed the mood. Did wonder where the missing vote went. But heck that’s local democracy for you. Glad my neighbour got to put in new windows.