Are Stonehaven’s Roads Safe for Cyclists? 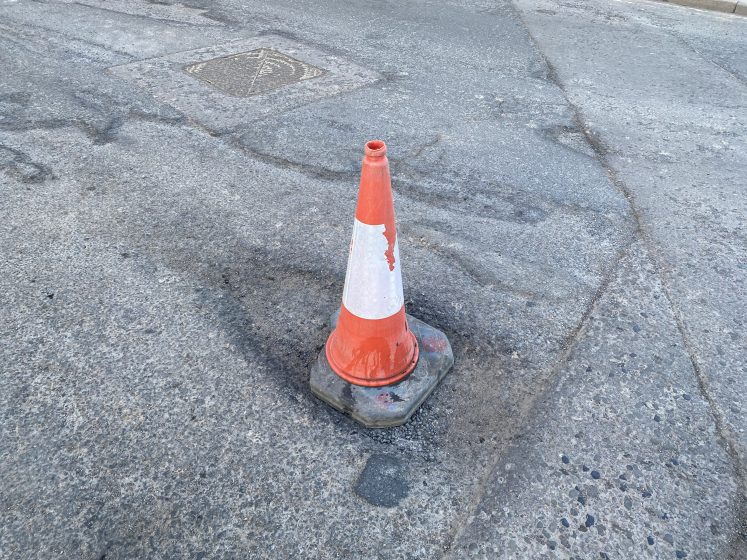 WHEN the Tour of Britain, begins its final stage of the 2021 race in Stonehaven on Sunday 12 September, we can surely hope the route being used by world-class, international cyclists will be in good condition.

But what about the rest of Stonehaven’s streets – and how fit are they right now for two-wheeled sustainable transport? Our community councillors clearly have concerns about potholes.

At their latest meeting, Mike Duncan said he was mindful of the condition of the roads when he was out cycling. On one outing, he counted five major potholes.

”If a cyclist hit one like that, he would come off,” he said.

And Ian Hunter said he had done just that.

”I fell off my bike,” he said. ” I went over my handlebars at the entrance to Brickfield Road.”

How to report a pothole

Potholes should be reported online. You will be asked to first of all locate the pothole – then describe it by comparing it to a series of photographs. There is a facility to add a photograph.

Once the road defect has been reported, the roads inspector has a target response time to inspect the road defect from the moment the customer enquiry was logged. This target varies from one to five days according to the class of road.

The clock starts for the repair time when the defect has been inspected and
categorised. According to an Aberdeenshire Council spokesperson, defects posing an immediate danger to the public are inspected and actioned within 24 hours.

It’s all about the Matrix

”There are potholes that have been there for months,” he said.

Mrs Dickinson said roads officers used a matrix to score potholes. She said it was helpful to understand what constituted urgency – what drives potholes up the score on the matrix.

According to a recent presentation to community councils, the matrix looks at:

the depth, surface area or other extent of the defect
the speed of traffic
the location of the defect relative to road features such as junctions and bends.
the nature and extent of interaction with other defects, and
forecast weather conditions, especially potential for freezing of surface water.

The cost of compensating owners of damaged vehicles

According to the RAC, ”If your car is damaged by a pothole, you may be able to claim compensation. The chances of being successful in claiming compensation will significantly depend on whether the pothole has already been reported.

”Councils have a statutory defence in that they cannot be held liable for a defect they are not aware of – either because it has not been reported to them or it has not been picked up their own system of inspection and maintenance.”

On behalf of Stonehaven and Disctrict Community Council, Mike Duncan made a freedom of information request for information on the cost of claims for damage to vehicles. Aberdeenshire Council provided the following details :