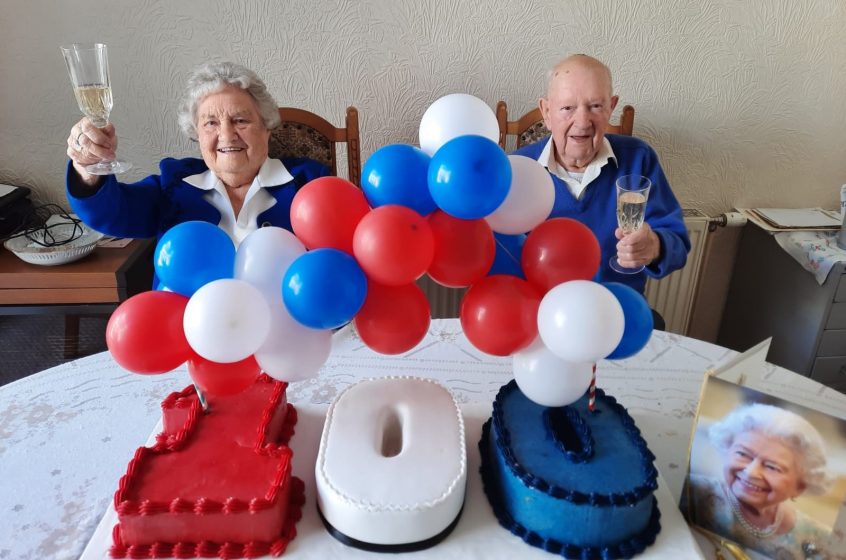 Joe and his wife, Margaret, are both ‘weel kent faces’ around the town, having lived in Stonehaven since 1968 when Joe took over as Head of Fetteresso Primary, subsequently moving to Arduthie Primary when Mackie Academy vacated the school premises in Arduthie Road in 1970.

The couple, who originally lived in Gurney Street, moved to Mearns Drive after Joe’s retirement and have enjoyed watching their extended family expand over the decades! They have four children – Gordon, Alistair, Jacqueline and Keith – and seven grandchildren and five great-grandchildren.

Both Joe and Margaret were enthusiastic golfers and were both members at Stonehaven for many years. Joe, in fact, only hung up his clubs three years ago while Margaret was a keen swimmer at the outdoor pool until COVID intervened.

Joe devoted his entire teaching career to schools in the North East, firstly at Pitmedden before being appointed Head Teacher at Catterline Primary School in 1956. He spent three years in the village before filling the same position at St Cyrus, where he taught for nine years before moving to Fetteresso Primary in Stonehaven in 1968.

On the opening of the current Mackie Academy in Edenview two years later, the original building was renamed Arduthie Primary School with Joe becoming the first Head Teacher. He remained there until his retirement in 1981.

Glasgow-born Joe was educated at Hutchesons Grammar School and interrupted his studies at Glasgow University in 1941 to volunteer for service in the RAF during World War II, spending five years in the Signals Corps in India.

On his return to Scotland, he enrolled at Aberdeen University and graduated with an M.A. Dip Ed degree. A passionate sportsman, he was also awarded a Football Blue and represented the Scottish Universities against the English Universities.

While at university, he met Margaret, who subsequently taught Physical Education in a variety of schools in the old county of Kincardineshire including Carronhill in Stonehaven.

During his spells at Catterline, St Cyrus, Fetteresso and Arduthie, Joe was closely involved with Kincardineshire schools football and enjoyed watching one of his ‘discoveries’, Don Masson from Banchory, go on to play for Scotland

“I thoroughly enjoyed my time at all these schools, engaging with the children and the wider communities,” said Joe. “It was a pleasure to teach so many enthusiastic pupils and to follow their progress in life afterwards.”

Frustratingly, the current COVID-19 restrictions have made it impossible for the extended Simpson family to gather in celebration. However, Joe’s centenary will be marked in the style it deserves once lockdown ends.

Love to both from Aileen and Neil

Many happy returns to Joe. Fond memories of all the years we were neighbours in Gurney St. and so pleased to see he and Margaret looking so well.