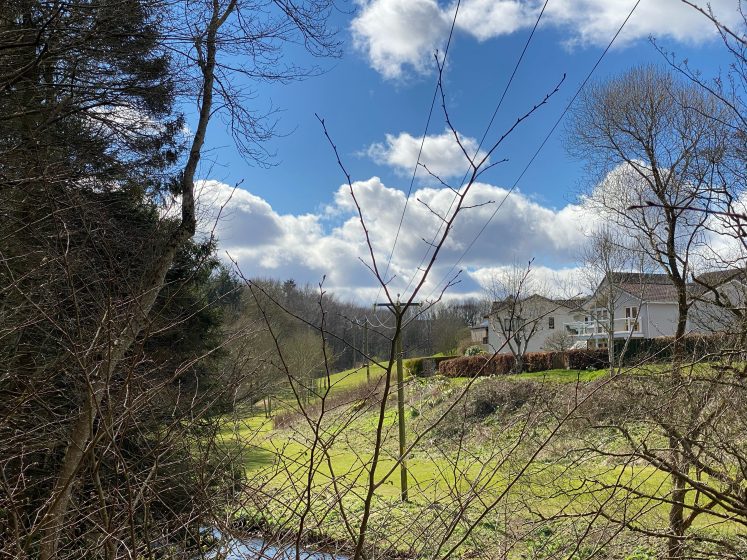 A STONEHAVEN man is seeking planning permission in principle for a new home at Riverside Drive along with improvements to the surrounding land.

If Mr David Morrison gets the go-ahead for his project, he will build himself a new home adjacent to his current property at Riverside Drive – and offer areas within the surrounding swathe of land to local groups for the creation of leisure and recreation amenities for the town.

The site is located outwith the settlement boundary and is classified as countryside. Mr Morrison has owned the land sloping down from the rear of Riverside Drive for approximately 13 years. During this time he has improved and maintained what had become an overgrown and unusable area.

It would appear Mr Morrison’s community-minded approach to land ownership is to continue. The masterplan accompanying his planning application shows allotments, bike trails and footpaths – and an area set aside for the use of the Stonehaven Scouts, who have their hall located at the western access to the site.

If permission in principle is granted, the land for community growing / allotment would be rented at a peppercorn rent to a community group such as Stonehaven Horizon or Stonehaven Allotment Association.

Meanwhile Grampian Tigers are identified as the group hoping to build a small bike park / track in the second area. The club, which has 45 members envisages a 250m track with technical features aimed at recreational youth cyclists but also suitable for skateboarders,and rollerskaters. Grampian Tigers have applied for funding from the £8 million Scottish Cycling Initiative.

According to the design statement, the informal routes through this area are a combination of trodden ground and hardcore paths – and not fully connected. It is proposed to form a series of informal footpaths with a natural finish. Stonehaven’s cyclists would benefit from off-road routes that could potentially connect into the linked walking network the Stonehaven Town Partnership hopes to create.

Full details of this application are available online – along with a facility to comment.

Newly approved green land from Aberdeenshire council. Why would they even consider this a viable option for a huge single dwelling with a small portion of community land?

Will the offer of the land still stand in the event the planning application is refused?
From a little research, I have found that 11 years ago, the allotment society were desperately (and publicly) seeking land. Where was the offer then?

Would have to done very sympathetically to the beauty of the natural surroundings there .

With a growing cycling community, what a brilliant opportunity for Stonehaven. Facilities here for people of all ages.

Community Benefits outweigh the negative aspects of this application.