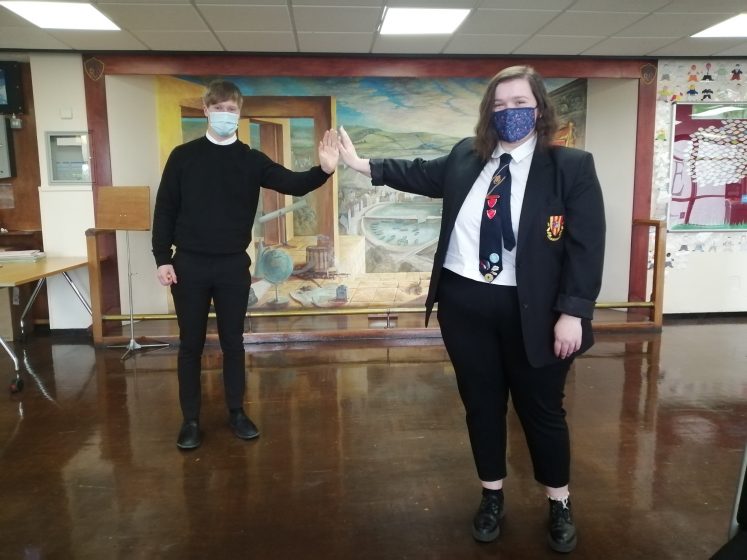 HAVING both undertaken family and community responsibilities with big hearts and enthusiasm, two pupils from Stonehaven’s Mackie Academy will, for the first time, share this year’s Hannah Dyson Award.

Lachlan McAlpine and Blythe Primrose were nominated by their guidance teachers who wanted the youngsters’ unstinting efforts recognised and rewarded.

The award made by Stonehaven and District Community Council is given to a young person with outstanding youth achievement such as academic or sporting success, an act of bravery, outstanding caring or community service, special achievement despite limitations imposed by hardship, disability or long term illness – or any other appropriate kind of excellence.

A young man with a caring heart

Laura Craig nominated her S6 Fetteresso pupil Lachlan, who had, for some years been a young carer for his grandmother who sadly passed away last summer.  Lachlan’s grandmother, lived with Lachlan’s family and needed round the clock care.  Lachlan was hoist trained and learned how to correctly administer pain relief so he could be involved in every aspect of her physical care.

”However, on talking to Lachlan about his gran,” states Ms Craig, ”it is clear that he placed just as much, if not more, emphasis on her mental and emotional wellbeing.

”He understood that to give her the best-quality end of life care, spending time with her to talk and just be was extremely important, if she was to feel comfortable and safe.”

And she said Lachlan attended school and got on with his work while making no comment or complaint about the additional responsibilities he had at home.

Lachlan has also volunteered in a local care home for the elderly and worked in an Aberdeen school for children with complex disabilities.

He said he was part of a family team who cared for his grandmother.

”Our whole family was able to help her,” he said. ”We were all doing our bit. She was family – we were just looking after her.”

Suzi Birrell meanwhile felt Blythe Primrose deserved the Hannah Dyson Award for her extensive contribution to her school and local community. The S6 pupil is Dunnottar House Captain – and the Youth Ambassador for The Haven in Stonehaven Community Larder.

Ms Birrell stated: ”As well as giving up her time to volunteer in the larder itself, she has been heavily involved in their fundraising campaign this year to keep the larder open.”

Blythe organised ‘Sounds from the Larder’, an online musical evening to launch the larder’s Crowdfunding event.

And she very successfully put together ‘Mackie Scares Hunger,’ a day’s fundraising at the school, complete with a pumpkin carving competition, the opportunity to dress up for the day, and donations of food or money to support the community project.

Blythe is also an extremely talented young musician and uses her skills to volunteer with Scottish Culture and Tradition’s youth section. Prior to lockdown she also visited local care homes to entertain and share her love of traditional music with the residents.

And you will be able to see Blythe supporting the Haven, yet again, on Saturday when she picks up her fiddle at 11am to serenade those collecting kits and seeds from the Roots to Resilience project.

Both Lachlan and Blythe said they were embarrassed but delighted by the news of their award. Ms Craig said she had enjoyed giving Lachlan his surprise news by making an announcement during his PSE class.

And Blythe heard her news from staff members keen to share the news.

”Some of the teachers couldn’t contain their excitement,” she said. ”They said they had good news for me!”

While the Community Council is unable to host its usual awards evening, Mackie Academy hope to host a prize-giving in September, when Lachlan and Blythe’s joint receipt of the Hannah Dyson Award can be marked.

Feature image – behind the masks there are smiles as the two teenagers do a distanced ‘high five’.

Well done Lachlan. Alison and Graham you must be so proud!
Lovely news! jo xx