Suggest, Consider then Vote on a Big Leisure Spend for Stonehaven 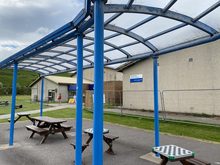 A PUBLIC vote this September will decide how Live Life Aberdeenshire, LLA, should invest £1.8 million in sports and leisure facilities for Stonehaven.

The voting options will emerge from an idea-generating consultation process known as participatory budgeting.

At last night’s meeting of Stonehaven and District Community Council, LLA team leader Claire Thomson said she was very excited to talk about the participatory budgeting project. She said it was an inclusive process, and one she hoped would engage with people who may not normally participate in this kind of exercise.

We vote in September – LLA deliver by March 2023

Using a short Powerpoint presentation, Ms Thomson outlined the steps leading to this autumn’s online vote – awareness campaigns, information gathering and visualised designs of options before the September vote. This will be followed by a feedback report that should be presented by November – and LLA want to deliver the chosen project by March 2023.

Meanwhile two members of SDCC, Dawn Black and Mike Duncan, will join a ‘reference group’ of key stakeholders. As well as representing the community in the process, this group should help promote a conversation in the wider community.

How far will £1.8 million go? Could other funding sources be used?

Our community councillors heard that LLA recognized Stonehaven has been under-resourced in terms of leisure offering.

And service manager John Cornfield said LLA had their own ideas as to how the the £1.8 million could be spent – a poolside café and additional gym for the leisure centre for example.

But Mr Cornfield said he hoped the community could make their own proposals and even tap into other funding sources.

‘’We want to excite other groups to come forward with other ideas and leverage funding that Aberdeenshire Council can’t reach,’’ he said.

The drop in badminton sessions at Mackie Academy have been missed, would be great to have access to classes like this again for our children.

As regular visitors to stonehaven,We always used to enjoy a game of putting ,now its no longer available it looks such a mess ,please give us our putting green back , yours ,a disgruntled holiday maker

We could use a small shallow pool for swim teaching. The town will miss Mackie Academy pool where a lot of the swim teaching was done. People already complain about there not being enough lessons available.