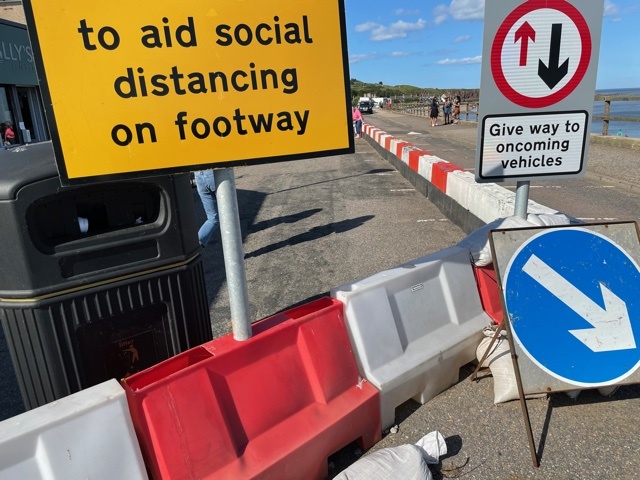 Business owners at Stonehaven’s beachfront have spoken out in anger at new traffic measures put in place on Friday – which they say are unsightly and dangerous.

Water-filled barriers became a feature around the town with the introduction of Spaces for People measures last June. Most have been removed – and the Spaces for People project is now concluded. But on Friday, replacement barriers were put in place along the strip of businesses on the beachfront.

And the business owners are not happy. Leslie Duff, who owns Aunt Betty’s ice-cream shop said the double-decked plastic barriers cordoning off the area were unsightly.

”How would you like to sit here inside a miserable war zone?” she said.

Mrs Duff said the barriers were dirty, so she had to power wash them. And she said they were a trip hazard as people tried to walk across them and would trip.

She said: ”People sit on them and we keep them clean. I have complained about six times. I get told about danger in my shop but the most lethal people are the council.”

”We have got to clean up our own bit and take responsiblity for that which I feel we really do. What we need is seats – gabions and seats.”

And, kicking it back into position, Mrs Duff said the plastic tray put in place to provide wheelchair and buggy access was unsafe.

”How are you supposed to get a wheelchair on to that? It is nothing but a danger.”

Molly’s owner Janice Langdon echoed Mrs Duff’s comments. And, as the area was popular with visitors, she said it should be improved as a matter of urgency – the business owners had been hoping gabions would be used.

”The majority of tourists who come to Stonehaven come to this area, so I think it should be looked at urgently,” she said.

”It doesn’t look good to the eye, the barriers stick out like a sore thumb. It looks like a no entry area.”

She added: ”Lesley power-washes the whole strip every morning, we sweep up and we pick up litter – and then you look at the barriers.”

An Aberdeenshire Council spokesperson said: “The barriers at the promenade previously formed part of the Spaces for People measures. Following the decision to lift the measures within the town centre, it was agreed that these barriers would remain in place, as the space provided good additional pedestrian space in an area with high footfall.

“We are about to commence a traffic management review in Stonehaven and this area will be included, whereby we will review the requirement and design of the current layout and look at longer-term proposals. The review process will also include public consultation. There is an obvious conflict between pedestrians and traffic at this location and until such time as the review is completed, we will retain the current layout.

“The additional red and white barriers have been added to infill previously missing sections and to improve safety by covering the black base sections that were visible along parts of the structure. We appreciate that these barriers are not new, but they are in a serviceable condition. The accessible ramp has been checked and has now been securely fixed to the adjacent concrete kerb.”

While these may not be the most aesthetically pleasing measure, they are not uncommon across the country, so I cannot see tourists being put off by their presence. Due to terrorist threats, London and more recently on the Royal Mile in Edinburgh, much uglier concrete barriers were erected. In time, these were painted or modified to make them less obtrusive
The barriers can’t be creating that much of a hindrance to business, if people are constantly sitting on them, dropping litter and making them dirty.
If gabions are used, surely they will collect more litter and be less comfortable to those wishing a seat. I also suspect they would be filled with out of character quarried granite, rather than beach stones which are a free and plentiful resource – despite the council’s unnecessary “shingle removal prohibited” signage.
At least if people are sitting on these barriers, they are not leaning on the fence along the top of the breakwater, which is now at least 35 years old (much older than the boardwalk which was replaced) and showing signs it may fail.