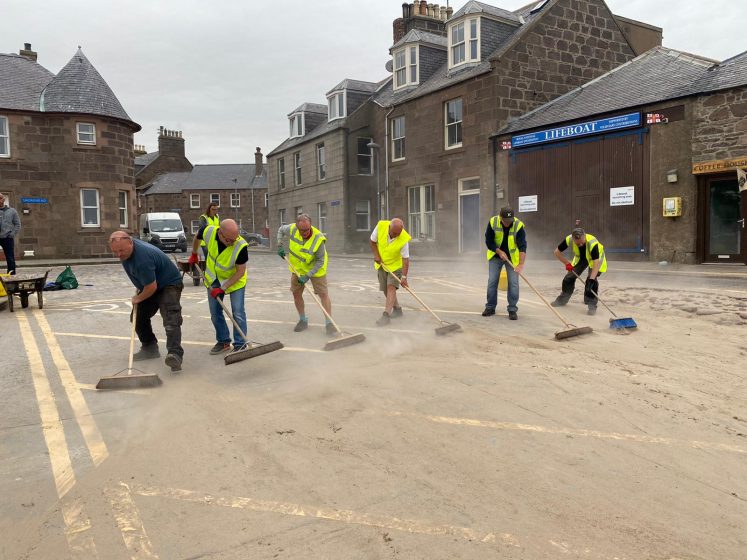 WITH Stonehaven’s entry into this year’s Beautiful Scotland competition being judged in two week’s time, teams are swinging into action to have the town looking its best for the big day.

The route has been divided into sections looked after by different organisations.

And the Fireballs committee were out in force on Tuesday evening, sweeping the sand off their traditional ceremony route, the High Street.

The Market Square is now freshly washed and swept by the Lions, who were busy both Monday and Tuesday evening. The Lions also donated all the new lavender plants needed to refresh the planting in the Square, along with three new Hawthorn trees to replace some that had died.

Meanwhile, the crew from our RNLI station are adding a touch of colour by planting out half barrels outside their operations cabin near the Backies car park.

Stonehaven’s entry into Beautiful Scotland is being co-ordinated by the Horizon Project. Convenor John Cruickshank said he was delighted at the enthusiasm being shown by everyone involved.

”It is fantastic to see the amount of effort all the groups are making. The Men’s Shed have been like a machine getting jobs done. They’ve really smartened up the beach toilets and they have their new planters they made using stanchions from the old Green Bridge.

”The Rotary Club have made a start on the promenade, and the Burns Fatherland Club have done a lot of work at the Burns Memorial Garden, putting together QR codes to make it more interesting for visitors.

”All in all it is really quite uplifting seeing everyone get behind us for Beautiful Scotland.”