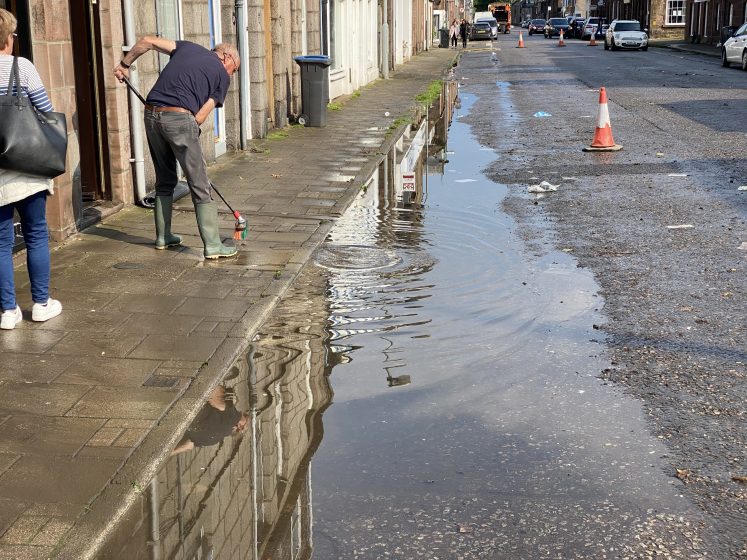 HIGHLIGHTING Stonehaven as an area vulnerable to flooding, a strategy document detailing actions for the years 2022 to 2028 comes before the Infrastructure Services Committee, when it meets on Friday.

The opening comments in the report make it clear the River Carron flood prevention work works will not solve all the town’s flooding problems – the town is still vulnerable to coastal and surface water flooding.

Some 1,600 homes are currently deemed at risk, with the number rising to 1,800 as sea level rises.

And the report goes on to detail the strategy’s objectives:

To combat surface water flooding, the following is planned: ”Areas at risk of heavy or prolonged rainfall causing flooding due to water ponding on man-made surfaces or overwhelming the drainage system are to be identified.

”These priority areas will provide a baseline for the identification of next steps in managing water ponding or over-whelmed drainage systems. This should guide adaptive planning to allow for the impacts of climate change to be monitored, understood and managed”

Aberdeenshire Council has already spent almost £1 million working up a scheme costed at £24 million – this would see raised sea walls all the way from Cowie to the Carron. This scheme was selected after a public consultation.

These proposals were cautiously accepted by the Infrastructure Services Committee back in November 2019. They endorsed comments from the Kincardine and Mearns Area Committee who said other measures such as extending the Brachans should be factored in first.

It is not clear if these comments have been heeded.

The report states: The detailed design for the Stonehaven Bay Coastal Flood Protection Scheme should be progressed based on the preferred option from the flood study.

”The responsible authority proposes this action as the best viable option for managing flood risk in this community. The delivery of this action is subject to capital funding being made available.”

It does appear though the local authority is to to engage further with the community, on the detail of the design of both Stonehaven’s coastal and Farrochie Burn flood schemes.

The Farrochie Burn Flood Study is a joint study with Scottish Water to identify potential options to reduce surface water and sewer flooding.

The full report along with a link to listen in to the meeting is available online. The section of the report pertinent to Stonehaven is at page 145 of 157 (as numbered at bottom of each sheet).

There are 2 baselines. In an ideal world, where the current drainage system is fully maintained and fully functional, there would be only one. Rest case, sadly.