Another Hub Needed if the Invercarron Resource Centre is to Close 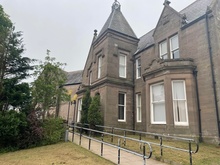 FINDING alternative accommodation for each of the different groups using the Invercarron Resource Centre is not good enough – say members of Stonehaven and District Community Council.

At their meeting this week, members expressed their ongoing concern at Aberdeenshire Health and Social Care Partnership’s, AHSCP’s, decision to turn the Invercarron Resource Centre into a vaccination clinic – and the subsequent displacement of its user groups to other venues.

Around 30 groups were using the Invercarron

”But if if is not goin to open,” he said, ”the the solution is not just to find rooms. The solution is to find another hub our our senior citizens – one with the facilities needed such as easy access and toilets.”

Ian Hunter said he too was unhappy with AHSCP’s solution .

He said: ”People want famiiarity: they don’t want to be sent to one place then another.”

”That would be better than farming the older people out to the rest of the community,” he said.

Mr Hunter who helped man the recent Community Action Plan consulation at Hy, said he was confident SDCC had the backing of the community in their battle to retain the Resource Centre.

”At the pop up shop there were a great many people extremely angry about the closure of the Invercarron Resource Centre,” he said.

Keeping up the pressure – Question at Holyrood, a meeting and a further letter to AHSCP

Cllr Wendy Agnew said a question was to be tabled at Holyrood about the matter.

And she said a meeting with AHSCP was to be held, which she would attend along with Ian Hunter.

”The committee of the users of the Invercarron Resource Centre had a meeting with AHSPC and told them they did not want the users to be split throughout the town.

”It will be very interesting to see what they are going to put in front of us,” she said.

Meanwhile SDCC, are to write again to AHSCP to express their ongoing concerns with their current proposals.

Their earlier letter to Audit Scotland has been acknowledged – while Audit Scotland cannot overturn council’s decision to close the Invercarron Resource Centre, SDCC have asked them to consider whether adequate consultation had been undertaken.

Feature image – Carlton House, no longer needed as an office. The local authority has recently proposed it be turned into flats

Keep up the pressure.