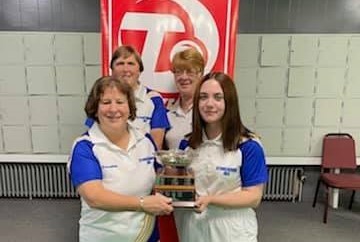 Stonehaven’s super squad of Bowlers have completed a double double after retaining their Triples and Rinks Crowns won in 2019.

Continuing their tradition of success in Scottish events, Stonehaven ladies again walked off with the prizes at the delayed 2020 Scottish Finals held at West of Scotland Bowling Club in Glasgow.

Having re-qualified for the semi-finals of each competition in late 2019, no one could have predicted then that it would take near two years before the completion of the Scottish Bowls calendar for season 2019/20, but after a strange couple of years we can finally celebrate their success again.

In the Triples Semi-final against Abbeyview, Stonehaven found themselves 10-13 behind after 12 of the 18 ends, but rallied to secure a 21-15 victory. What followed in the afternoon was even more heart stopping.

Stonehaven got off to a stuttering start to say the least. A disappointing first four ends saw the team 0-12 behind after losing a near maximum count in the fourth end. It didn’t look good. It still didn’t look good with 12 of the 21 ends complete, as Auchinleck had kept Stonehaven at bay to now lead 18-9 with time running out for a fightback.    Stonehaven won 26-21.   The final 9 ends saw Stonehaven outscore the opposition by 17-3 to claim a place in the final. The Double Double was on.

The day of the finals dawned and the triples were first up against Headwell, and again they found themselves 7-10 behind after half distance. There was to be no denying them though, as again they went to work and picked up a crucial 5 in the 12th end and a well timed 3 in the 16th helping them to an eventual 18-14 victory. Part one was complete, now for the rinks.

At this point Sheila, Kim and Catherine had played twelve hours of Bowls in twenty-four hours. Another four hour game against  Balbardie was ahead of them to complete their little piece of history. In 2019 it had been the rinks up first and after a narrow success, the Triples used the momentum to build a big 18-0 lead after five ends… would history repeat itself? Would the double double really be coming back to Stonehaven?    Stonehaven led the rinks final 11-0 after four ends. Could Balbardie repeat Stonehaven’s comeback of the previous day? In the end they got within four, but the double double was secured with a 21-17 victory after a measured performance, keeping Balbardie at arms length at all times. History was complete for a little club from the North East.

“We are delighted to do a first double double success, especially considering we are a small club from the North East. We would like to thank everyone that supported us over the course of this journey,” commented Kim Watt after the game.

The Stonehaven ladies will now represent Scotland at the British Isle’s Championship in Belfast during March 2022, so look out for more Bowls action to come.   If you wish to try Bowls in Stonehaven, the Indoor Bowling Stadium is located within the Recreation Grounds complex on Beach Road. You can come and try yourself, or look out for one of our upcoming Try Bowls events, with the next one due to be a competition for newcomers to the Sport.    All that remains to be said is… Mon the Stoney!