Sad End of an Era at Golf Club 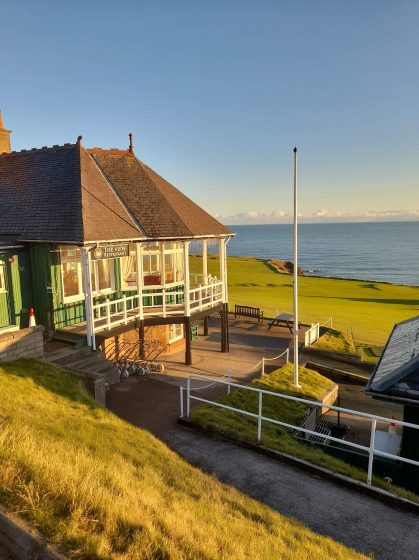 THE flag is flying at half-mast at Stonehaven Golf Club this week, as it does, sadly, every time a member dies.

It is not an unusual occurrence, unfortunately, in a club now in its 134th year and with a membership of a rather high average age.

But the passing of Stuart Mackenzie at the weekend, after a very short illness, does have an unusual significance as it marks the end of a particular era for the golf club.

Hitler’s bomb left its mark on the first fairway of the cliff top course in 1940, just a year or so before Stuart was born in Stonehaven’s Auld Toon.

This year, Stuart, who is survived by his wife Lizzie, would have started his 70th year as a member of the club, having joined in 1952, just a year before former club manager Willie Donald, another long-serving member who more than left his mark on the club.

Unlike Willie, who was known by all and sundry members during his time of office, Stuart may not be familiar to the majority of current members as it is many years since he took part in competitive play.

But Stuart Mackenzie remains a golfing competitor par excellence. He had a solid all-round game, not the longest off the tee but not short, and his round-the-green game was among the best in the club, known particularly for his demon putting.

His roll of honour includes three club championships (1969, 1970, 1972), four match-play championships (D F Leslie’s), all scratch events of course, and numerous other trophy wins in handicap events over the years.

In the 1980s, Stuart’s nephew, Bruce Ferguson, joined the club and Stuart took the lad under his wing, becoming his golfing mentor, an interesting new challenge.

It proved a successful enterprise as Bruce won the club’s junior championship in 1988 and has gone on to become club champion four times. He still hopes, of course, to beat Stuart’s match play total, though he might have a problem with that as he has now turned 50 and has won it only once so far.

Stuart caddied for Bruce in several championships, including 2003, which was Bruce’s first victory. That round started inauspiciously, however, as Bruce’s opening drive was picked up near Hitler’s bunker by a passing labrador dog, with a none-too-pleased Stuart having to venture over the cliff to retrieve it.

Many others over the years have benefited from Stuart’s willingness and patience to coach beginners, including Robert McIntosh and Kevin Boyne. Another was club veteran Alistair Smith. Stuart worked with Alistair in the local council’s roads department and encouraged him to take up golf in the 1970s. The pair could be seen until relatively recently enjoying coffee sessions in the clubhouse, often with Neil Robertson, reminiscing and debating the latest trends in how to master the perfect golf swing.

Another significant contribution Stuart made to the club was to serve on the council for six years and, more recently, to help head greenkeeper Graham Dawson solve the riddle of the myriad drains and natural springs around the course. Graham said: “I would have been lost without his advice. He had a knowledge no one else had and he was very helpful to me. He was a lovely man.”

I loved the man, heartfelt condolences to Liz.