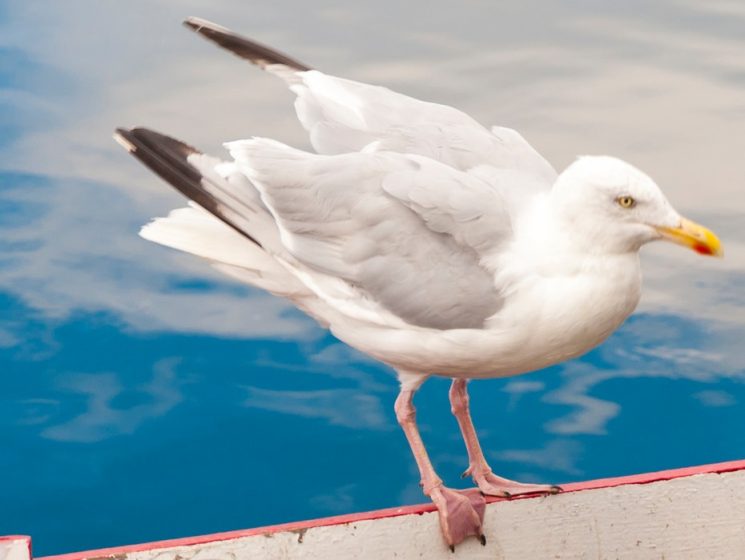 Aberdeenshire Council is continuing its detailed review of the way it tackles the extremely complex issue of urban gulls across the region.

The move comes in response to continuing complaints relating to gulls from communities across Aberdeenshire including noise, aggressive behaviour, fouling and the feeding of gulls.

Gulls are doing particularly well in many towns and villages – both in urban and rural areas – because people continue to provide food for them. That’s permitting them to thrive in an artificial environment with an artificial food supply which is neither healthy for the birds nor our communities.

However, the council’s Protective Services currently have no statutory powers to take action against gulls and can only give advice to members of the public as to how they can help deal with the problem.

Gulls are protected under the Wildlife and Countryside Act 1981, which means it is illegal to capture, injure or destroy any wild bird, or interfere with its nest or eggs, unless you have a licence. Usually, the issue with the gulls starts in March and continues until September while they are nesting on rooftops, although there are increasing numbers choosing to remain in towns all year round.

During a meeting of the council’s Infrastructure Services Committee on Thursday (Jan 20), officers explained that through engagement with a variety of stakeholders including pest control firms, the RSPB, the University of Aberdeen and other local authorities, it has become clear that far more information and consideration is required to develop an effective strategy to manage the interaction between urban gulls and local communities.

There remains considerable doubt regarding previous strategies which have been tried in terms of their longer-term effectiveness. While egg and nest removal may provide immediate respite in a particular area, gulls are very adaptable and there are concerns that this simply moves the problem into other urban areas.

It became clear from initial discussions that the key to developing an effective strategy for responding to concerns regarding urban gulls is to have a better understanding of gull behaviour and the drivers that are causing gulls to move from traditional habitats to urban settings.

Careful consideration is now being given to all legal options for minimising gull issues which are likely to include potential controls on feeding gulls, waste storage, gull proofing buildings and nest and egg removal.

Officers will present their completed review and costed action plan to the Infrastructure Services Committee in March setting out recommendations on how the council will tackle the urban gull issue. One option currently being considered is for a research project to be led by the University of Aberdeen.

Cllr Peter Argyle, chair of Aberdeenshire Council’s Infrastructure Services Committee, said: “While there continue to be too many who point the finger at the gulls and say they are a nuisance, in many respects they are not – human behaviour leads to the problem. We have created both a false environment and false food supply on which they are now thriving which is exacerbated by the unacceptable volume of littering which continues to occur despite all our messaging and education. I look forward to the outcome of our review and hope that, together, we can make a real difference within all our communities.”

Vice-chair Cllr John Cox added: “As we have limited powers to take action against the gulls, the key to reducing attacks by gulls lies in reducing their ability to breed and limiting the supply of food. The current advice – dispose of all food waste appropriately, do not leave food out for gulls in your gardens and do not feed them in other places where it encourages them to congregate and steal food – is a step until legislation permits the council to take other action.”

Advice for residents how they can help includes:

• Do not feed gulls on streets and gardens or drop food scraps, as gulls are scavengers and discarded food encourages the gulls to stay within close proximity to the food source. Dispose of food waste in a responsible manner

• You can arrange for an appropriately licensed pest control company to oil or pierce eggs to prevent hatching or have the nest and eggs removed.

This review was first reported in October. We now learn that officers “need a wee bit more time” and will draw their process out until March- by which time it will be too late to implement whatever changes they recommend. I note that the various stakeholders it’s taken four (then up to six) months to consult, do not include households affected by this.
I have previously reported where I see a large part of the gull’s food coming from – spilled household food containers as they are being uplifted by refuse operators. The householder pays careful attention to carefully place the bags and lock the catch, only for it to be roughly scooped up and some of its contents spilled upon collection. There was a time when the bin people carried (and used) brushes for anything spilled from a bin. When did you last see this? Instead the public get blamed. How about some more public bins in the streets?
If the expert advice is that egg and nest removal only moves the problem somewhere else, then how is the advice to install expensive netting systems effective?
Likewise, to arrange (which means pay for) for a licensed controller to pierce or oil the eggs must be equally ineffective.
So the resources (salaries) of officers over six months have been wasted trying to find ways for the council to blame others and “save” money by not using the effective methods of nest removal which were dropped.