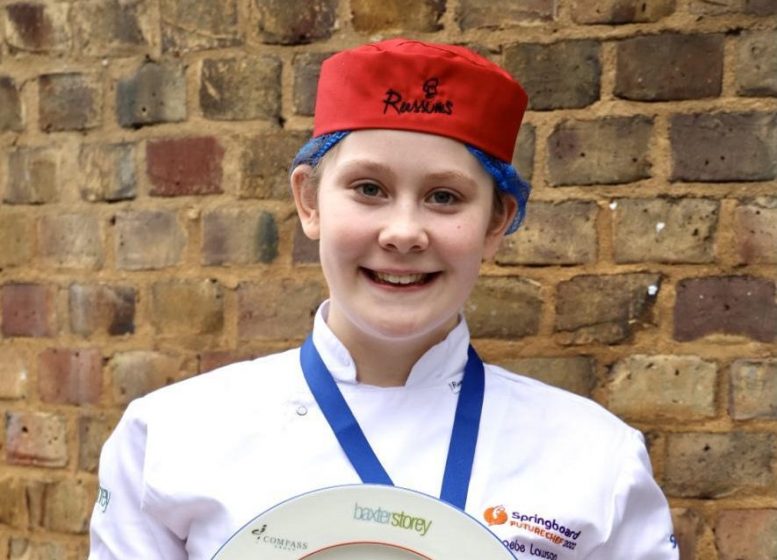 Phoebe was successful in local and regional heats before being selected to represent the North of Scotland at a competition in London earlier this month. Some 6,000 young people aged 12-16 originally entered the competition, representing around 310 schools.

Phoebe said: “This win means a lot to me. There were months of hard work and it’s amazing it has all paid off. I’m really thankful to my teachers and mentors who have been so helpful and supportive throughout the experience.

“I have lots of plans for the future and I’m looking into different apprenticeships across the UK. It is brilliant this has meant lots of opportunities have come my way to help my future career.”

Phoebe’s home economics teacher, Kirsty Wilson has been recognised by Springboard as ‘one very proactive teacher’ who ‘always supports the students’.

She said: “As a teacher it is always great to see pupils strive to achieve to the best of their abilities and the Springboard FutureChef competition encourages and allows that to happen. Phoebe did a fantastic job. A number of local restaurants and hotels support the competition and it is brilliant for young people to benefit from the support of industry mentors, in Phoebe’s case Chris Macleod from Compass Group.”

Mackie Academy head teacher Louise Moir added: “It is great to see our young people hold their own on a national stage and put the commitment, time and effort in to achieve this award.

“Phoebe clearly has a natural talent but her capacity to perform consistently through the competition is a sign of a strong character that has listened to the advice given to her and taken on board what she needs to do at each stage to succeed. A very well done to Phoebe and thank you also to my wonderful school colleagues and industry mentors who have helped her on this impressive journey.”

As well as a trip to Royal Ascot with Sodexo, Phoebe won £100 cash, personally embroidered aprons, chef jackets and skull cap, a cook book, commemorative plate and £500 for the school to spend on new home economics equipment from a host of sponsors.

Aberdeenshire Council’s Head of Education Vincent Docherty underlined the importance of industry support for schools. He said: “A big congratulations to Phoebe and Team Mackie. Time and time again we are reminded of the huge difference industry experiences, mentorship and partnership support can make to the lives of our young people and I’d like to say thank you. This is a great example of Developing the Young Workforce (DYW) of the future.”